Aperture, Noise and Film Grain:The Quest for a Filmic Portrait 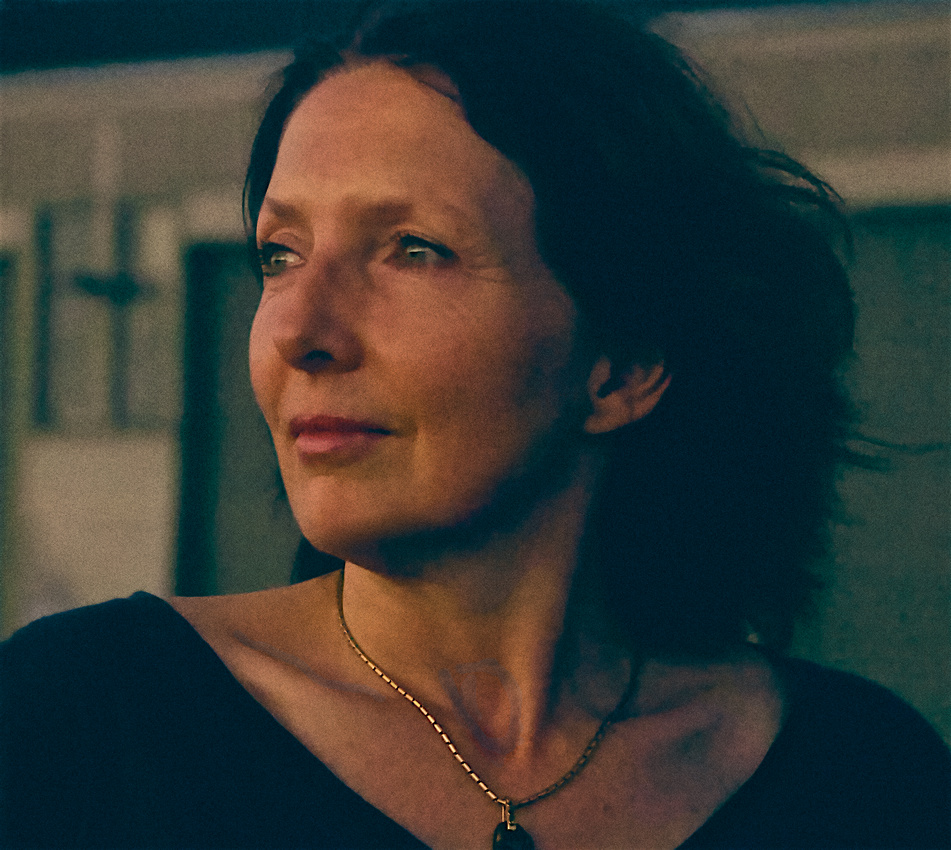 This final portrait edit was created entirely in Apple's Aperture software here at the end of 2020. Yes, I'm still running Aperture five/six years after Apple closed the door on supporting and updating it. I'll tell you why in a later post, but for now, let me tell you how this image came to be.

I took this portrait of my very dear friend, Artist, and student Ineke about five years ago in San Francisco, after I had already ceased using Aperture for Capture One Pro. I never looked at or processed this image even back then. Surprisingly it took five years and a return to Aperture for me to realize its potential and have it become my favorite portrait to date.

My goal was to do an entire edit using only the tools in Aperture and create the best filmic portrait I could. I had written a blog post on my love for the analog film emulation process with a link to my previous original post on the topic if you care to read those (very fascinating!) This time I wanted to skip all of those choices and see what Aperture alone could do for me (or rather I with it.) 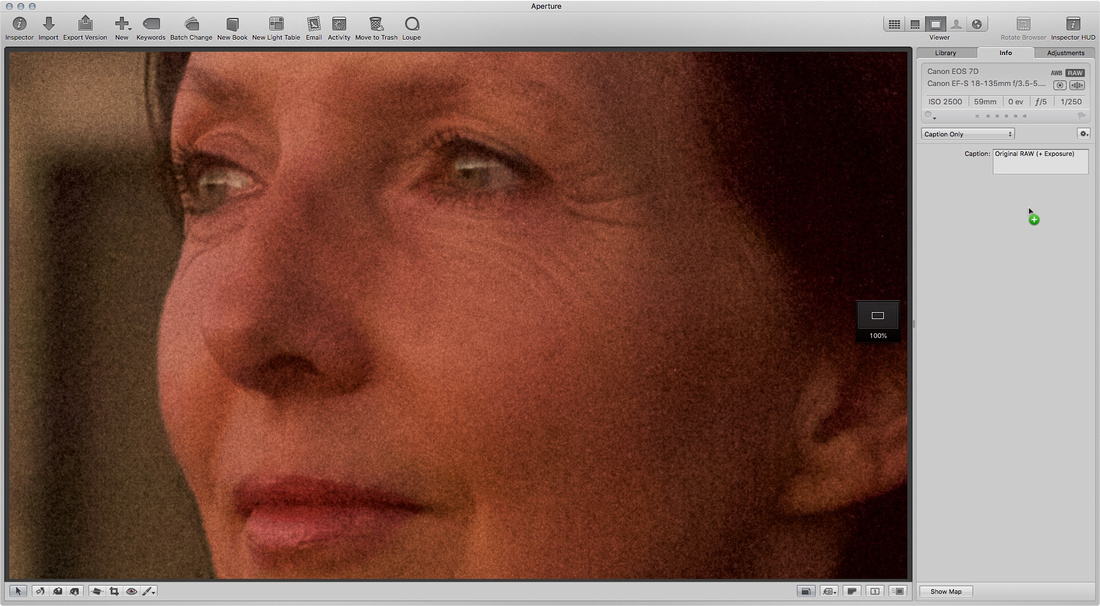 The first thing I noticed when I opened this image in Aperture was that even at ISO 2500 it was a bit underexposed. So increasing the exposure revealed all the terrible digital noise that sadly many Canon cameras are prone to at high ISOs, particularly the 7D. Now let me just say: NOISE IS NOT FILMIC! I'll get to the Aperture solution for dealing with noise in a RAW file (you do shoot RAW, right?) in a bit, but I initially decided to use the NIK Dfine 2 plugin in my Aperture to denoise the image before doing any other edits. 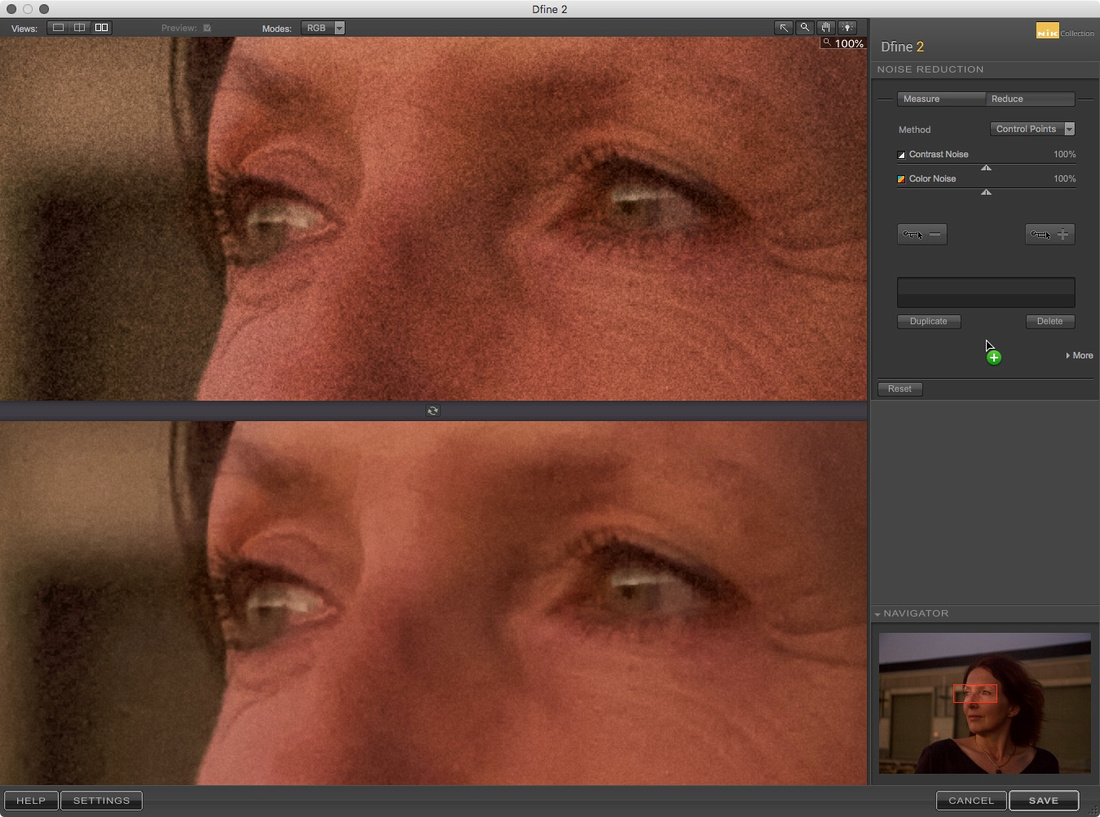 Now NIK Dfine 2 typically does a very good job with denoising, and it doesn't matter if you have the original NIK version, the (formally) free Google version or you have opted for the newest paid iteration from DxO Labs, it all works the same. Dfine first analyzes your image for Noise areas which you can change, then renders a default recommendation. You are of course able to make changes to those settings if you like. In this case I went with the default setting. 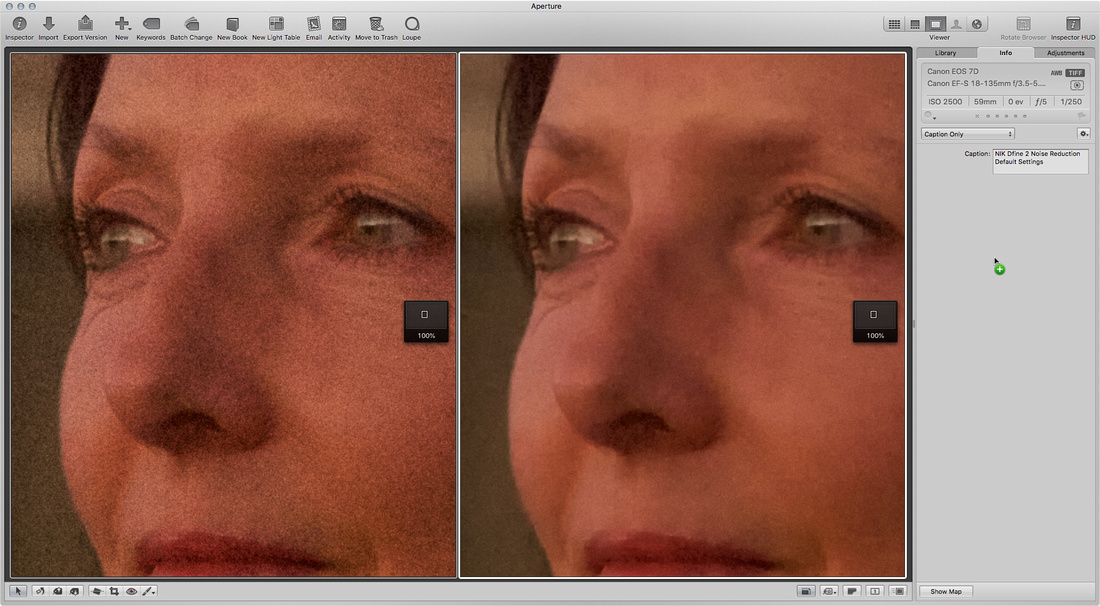 Back in Aperture you see the original RAW with noise on the left and the denoised TIFF version on the right. Now all denoising processes will understandably cause a softening of your image. The battle in the settings is how far to go one way without losing too much in sharpness. Aperture has a nice solution, I think. But before I get to that, I had to compare the  noise reduction capability of another Aperture plugin I have called Noiseless CK (formally a MacPhun product, it is now built into Skylum's Luminar 4 and Luminar AI software and no longer available as a stand alone app.) 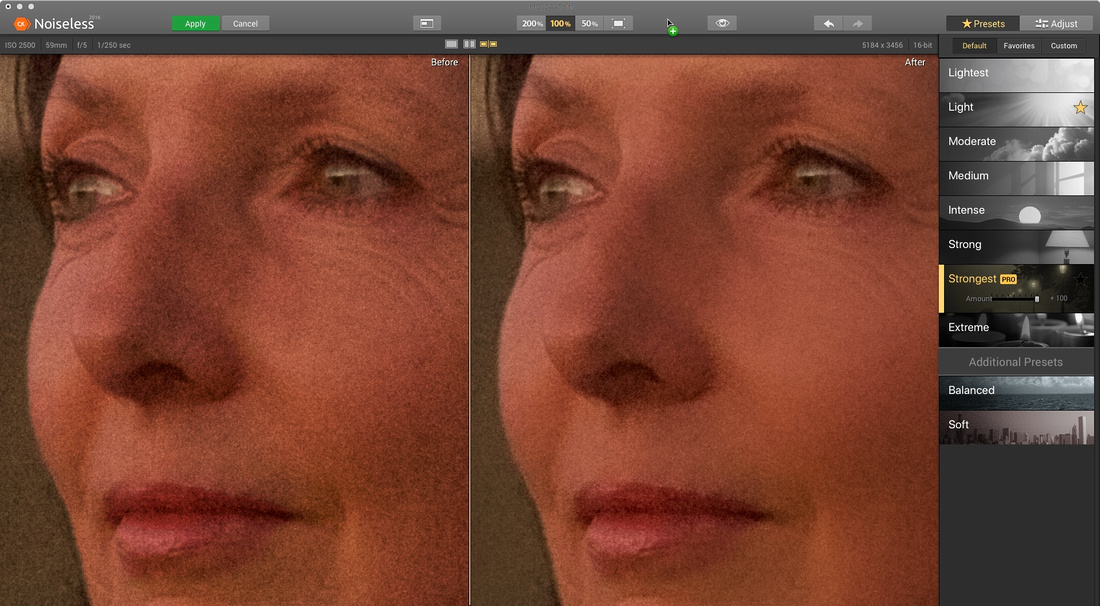 Noiseless CK (even in its present iteration built into Luminar) is template or preset based (one of the reasons I'm not a fan of the software), and it even allows you to save your own presets, which could be useful for some users. After playing with each of the preset settings, I determined the Strongest Pro gave the best results, but even with that I was not 100% happy with the results. Yes, I could tweak the settings further, but it felt like too much noodling for marginal returns on quality.One other point on Noiseless CK, it was noticeably slower on processing and saving the results compared to the NIK Dfine 2. 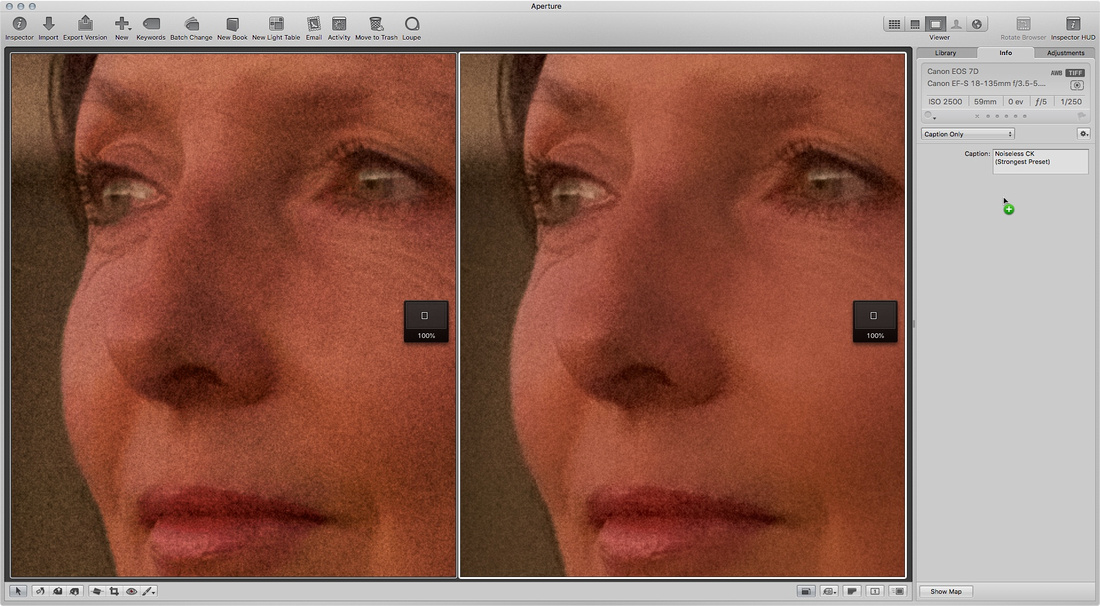 Back in Aperture you can compare the results. Original RAW on the left, Noiseless CK on the right. 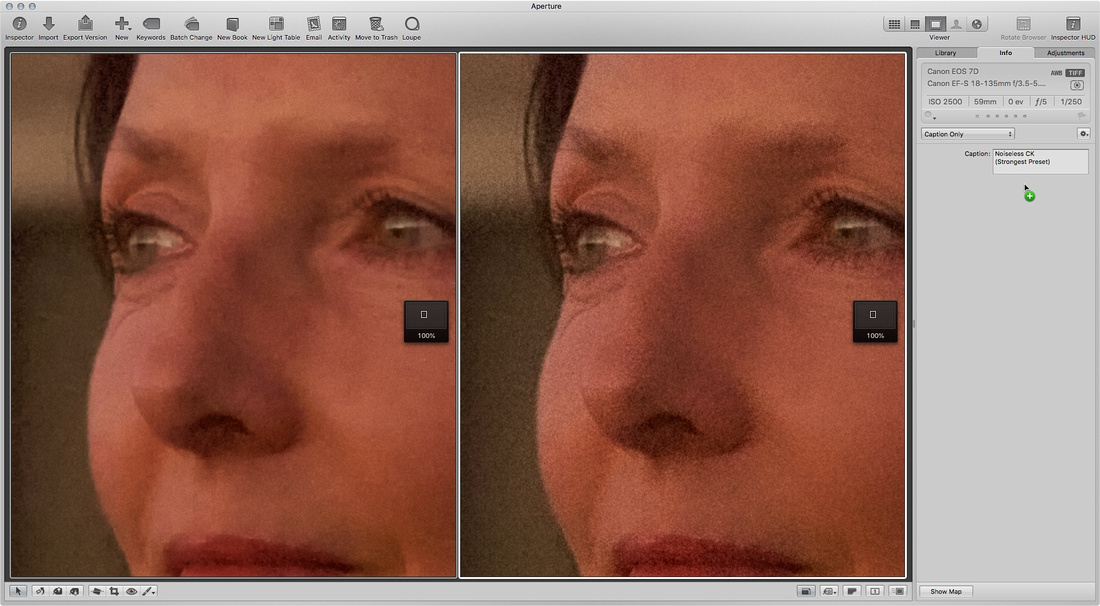 Now let's get to and compare the built in Aperture solution to RAW denoising. The original RAW image is on the left and on the right using Aperture's RAW denoise adjustment gave some rather surprising (and pleasing) results. By default Aperture sets the De-noise adjustment to 10%. I moved it to 75% for this image to get results I was pleased with. I also added a separate Sharpener adjustment at the default settings to my adjustment stack to compensate for the loss of sharpening de-noising does. 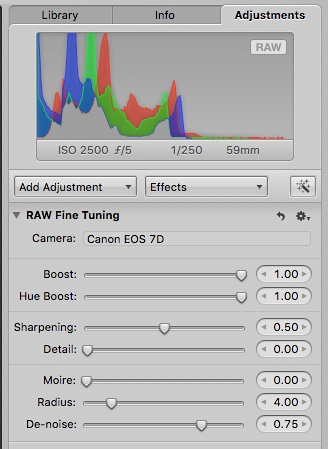 This adjustment in Aperture is only available for RAW files, if you are  trying to denoise a TIFF or JPEG, there is a seperate Noise Reduction adjustment you can add to the stack with additional controls and you can opt to "paint in" or "paint out" the adjustment (mask) where you want, along with all the brush tools like applying it to only shadows, midtones or highlights, feathering and opacity as you like. This Noise Reduction gives very different results than the RAW De-noise adjustment which is also only a global adjustment. 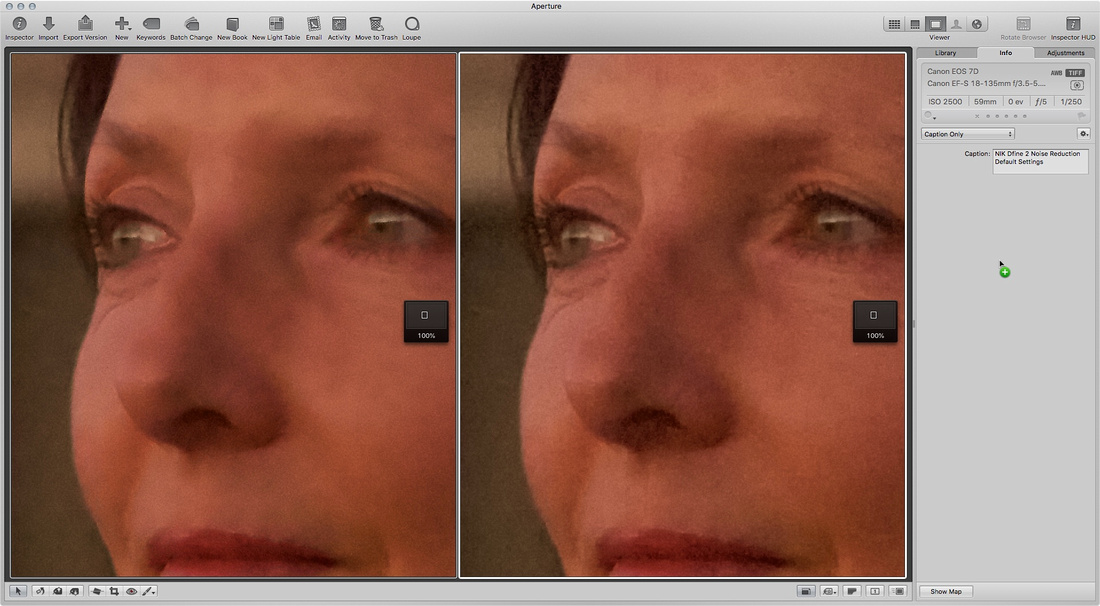 Comparing the Aperture RAW De-noise adjustment at 75% on the left to the NIK Dfine 2 Noise reduction on the right.

And comparing the results of the Aperture RAW De-noise adjustment at 75% on the left to the Noiseless CK adjustment at the Strongest Pro setting.

Now, you may say Trace that's all well and good and certainly having a noisy image does not a filmic image make, but neither does removing the noise! And you would be right. The missing ingredient to creating a more analog film quality is in the addition of a randomized grain pattern that more closely mimics the traditional pattern in different films. There are a few programs and many plugins that try to give you that look. Fewer still are really successful. Both Capture One Pro and Exposure X5/X6 have robust film grain tools, probably the best on the market. Even the NIK plugins (Silver Efex Pro, Color Efex Pro + Analog Efex Pro) have grain emulation features that are fun to play with. But as I wanted to keep this whole edit process within Aperture, I turned to the one feature in Aperture I have available to emulate film grain: 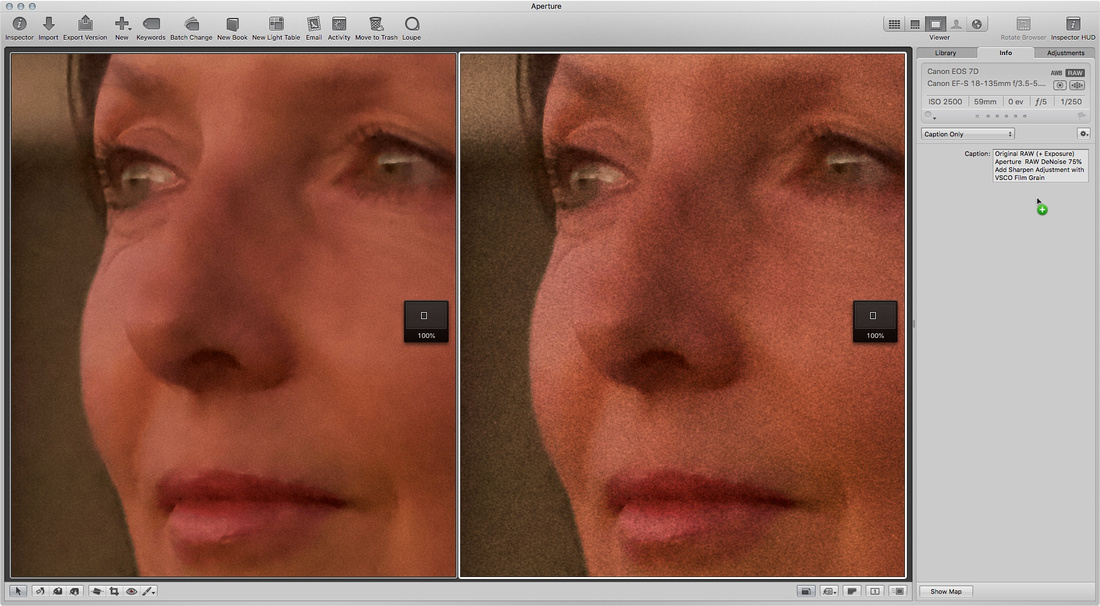 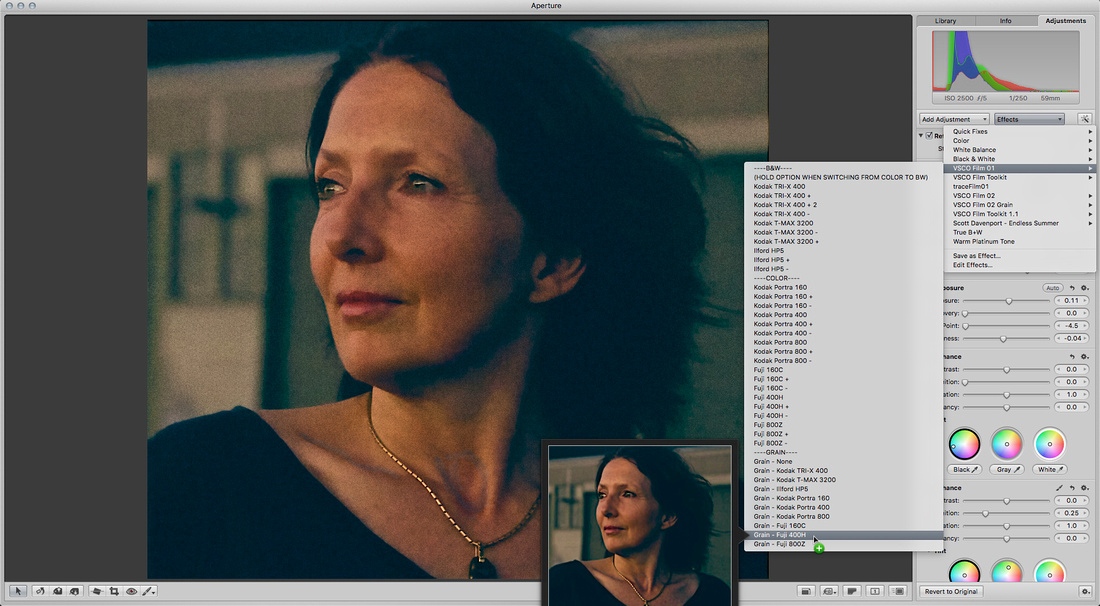 The *VSCO film tools I originally wrote about in my first blogpost on film emulation sit nicely within the Effects menu of my Aperture and offer a wide range of adjustments to emulate various Color and B&W films (mostly Kodak + Fuji), along with seperate film grain adjustments and other tools for creating a filmic look. For this portrait I was only interested in adding film grain to the image that was processed with the Aperture RAW De-noise tool. Odd and wonderful thing about the VSCO toolset is it uses the existing tool bricks within Aperture to achieve its results. It's not a plugin in the traditional sense. You never leave the Aperture interface or deal with a seperate plugin window. And very oddly it uses Aperture's Burn and Dodge tools to create the film grain! One nice thing about this way of adding film grain in Aperture is both tools are adjustable as to their amount, so you can vary the film look. Very clever! 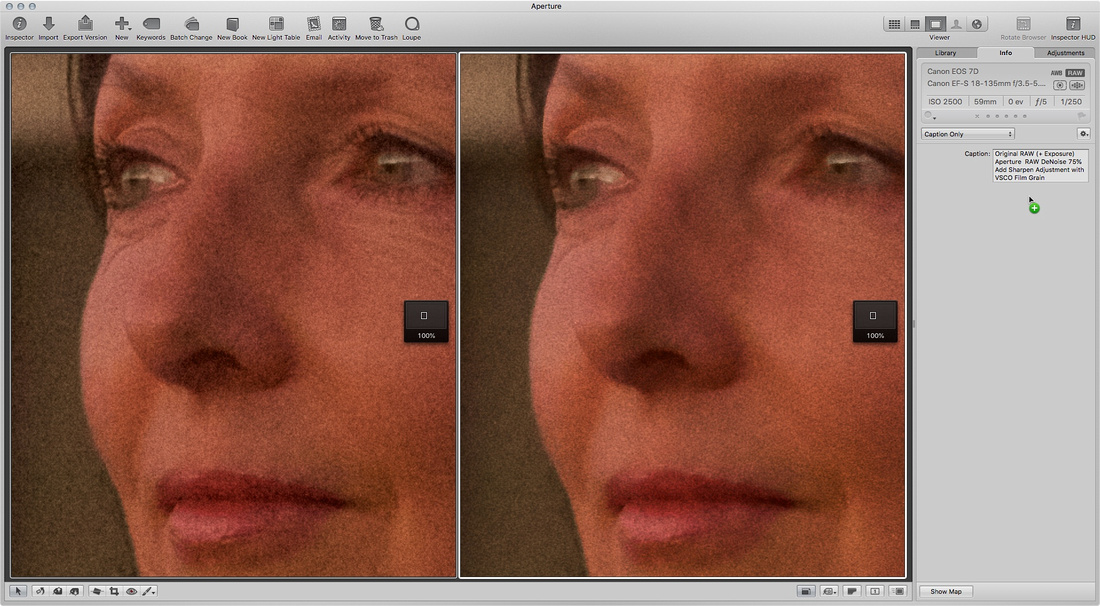 Comparing the original high ISO RAW image with digital noise on the left to the Aperture RAW De-noised image with VSCO film grain added on the right. You really see the difference between noise and a digital filmic grain. 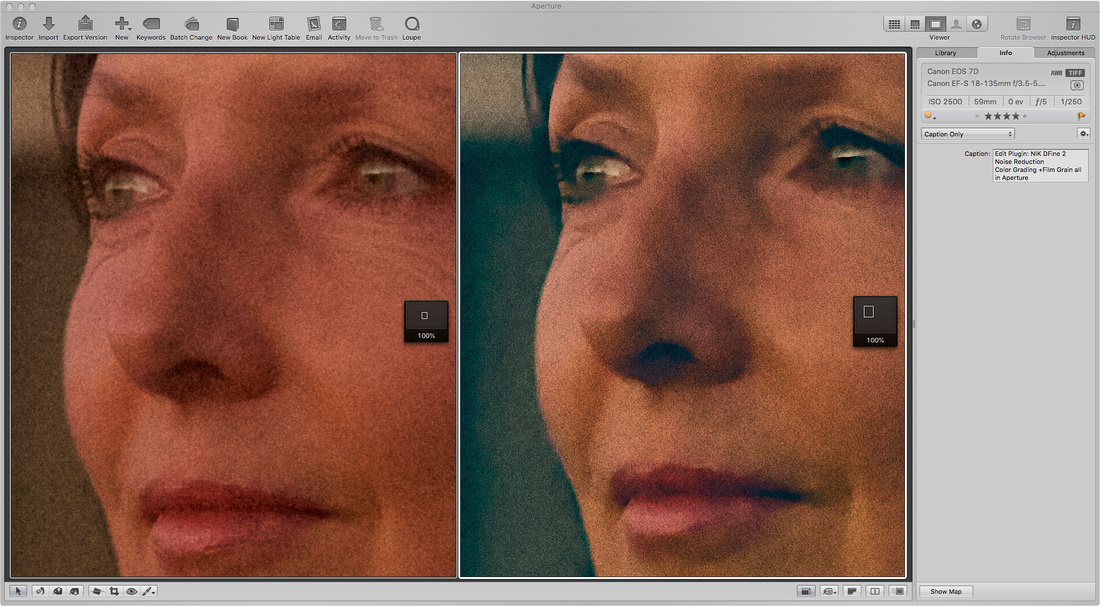 And from the original RAW image on the left to the fully edited, color graded and film grain added version, all in Aperture! *For the final version of this portrait, I did use the variation that was denoised using the NIK Dfine 2 plugin, as I finished it before I decided to do the comparisons with Aperture's RAW De-noise tool, but I think that counts. 😎 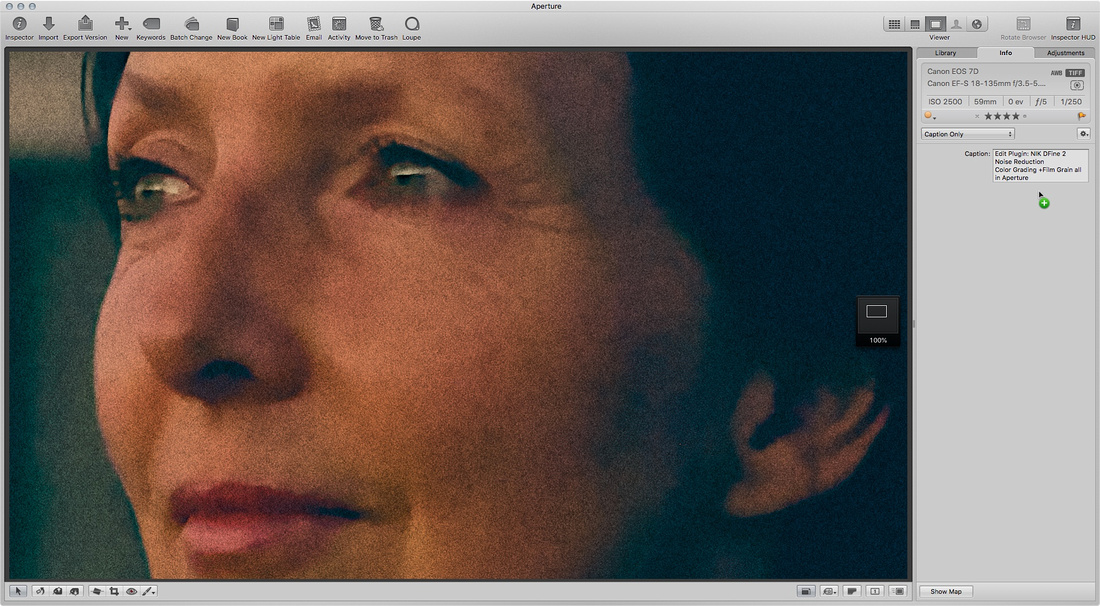 The fully edited 100% detail view of my all Aperture filmic portrait. I'm really, really pleased with the results. Now to figure out how to keep Aperture running for many years to come!

*One final note for Aperture users regarding the VSCO Film Tools: While VSCO originally created only two film packs (01 + 02) for Aperture back in the day, before giving up on Aperture and only producing more packs for Lightroom, what they made for Aperture was very robust and more than adequate. That said, the company no longer produces film packs or offers a stand alone application anymore. They have pivoted to become an online, community based image sharing site requiring membership to use their latest tools. Not unlike Instagram in its own way. So you sadly can no longer get the tools for Aperture. I'm glad I got in on the ground floor when VSCO arguably gave birth to the whole analog film emulation craze. Early adoption has its advantages!