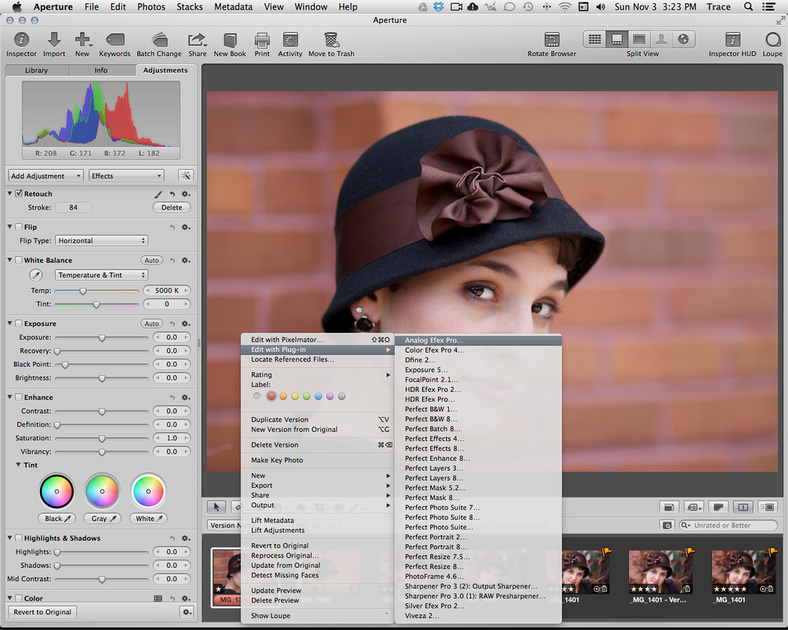 To answer the question above, it can now be argued that "yes, indeed", digital photographers have film. Or rather "film simulation". What's propelling this resurgence of the film look? Is it just a nostalgia from old-school photographers, or is it a hip trend? Either way you see it; hate it or love it, there are a lot of choices for software film simulations, and no two experiences are the same. 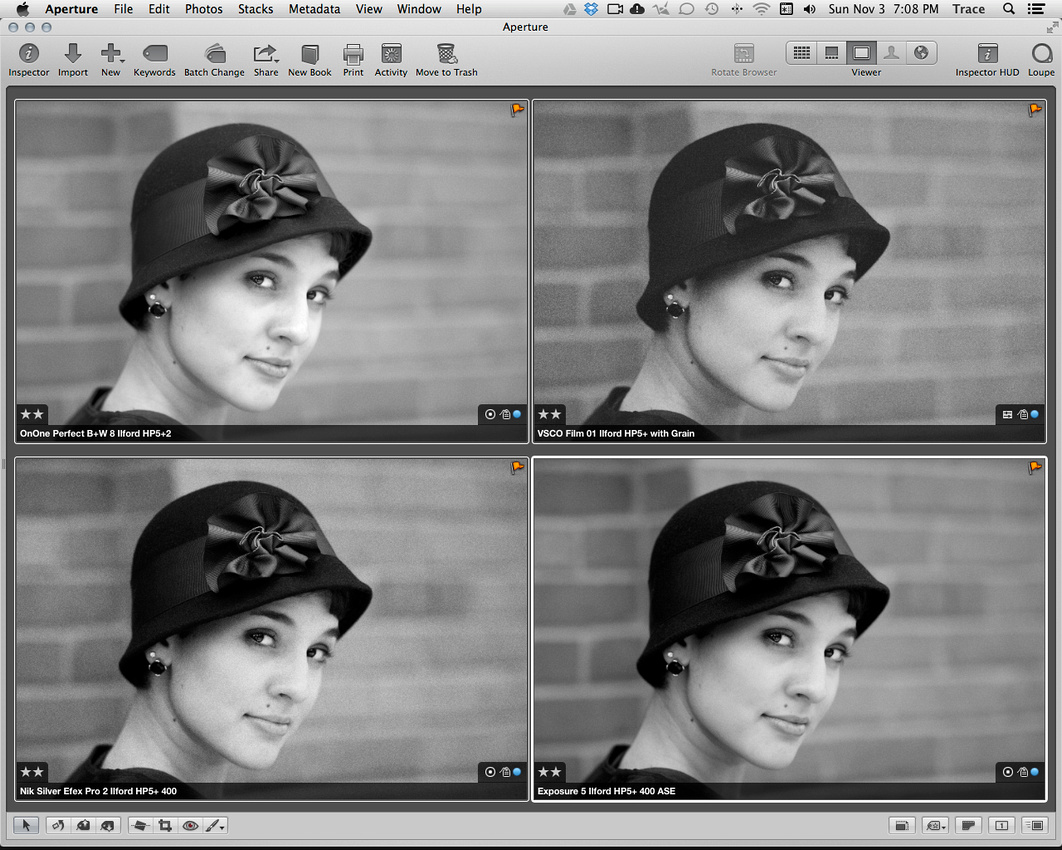 Before we dive into the different program choices for film simulation, I want to show these examples of four that all have a preset for the Ilford HP5+ film. Not all of these programs have the same film names, or include all the same parameter adjustments, but this is one they do all have. 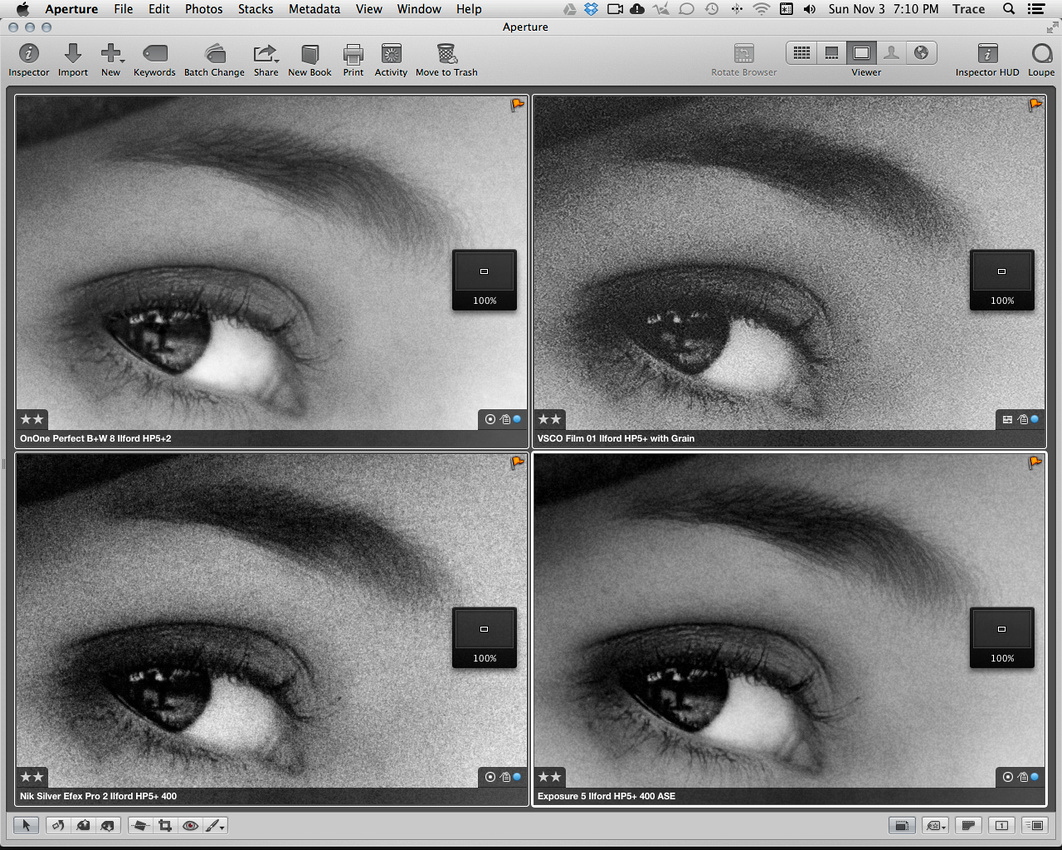 As you can see, each program handles the simulation differently at the base preset level. Not only do they simulate differently, the experience of working in the programs and the adjustments you can do to get the look you want, varies. This isn't a matter of just adding grain or noise to an image. 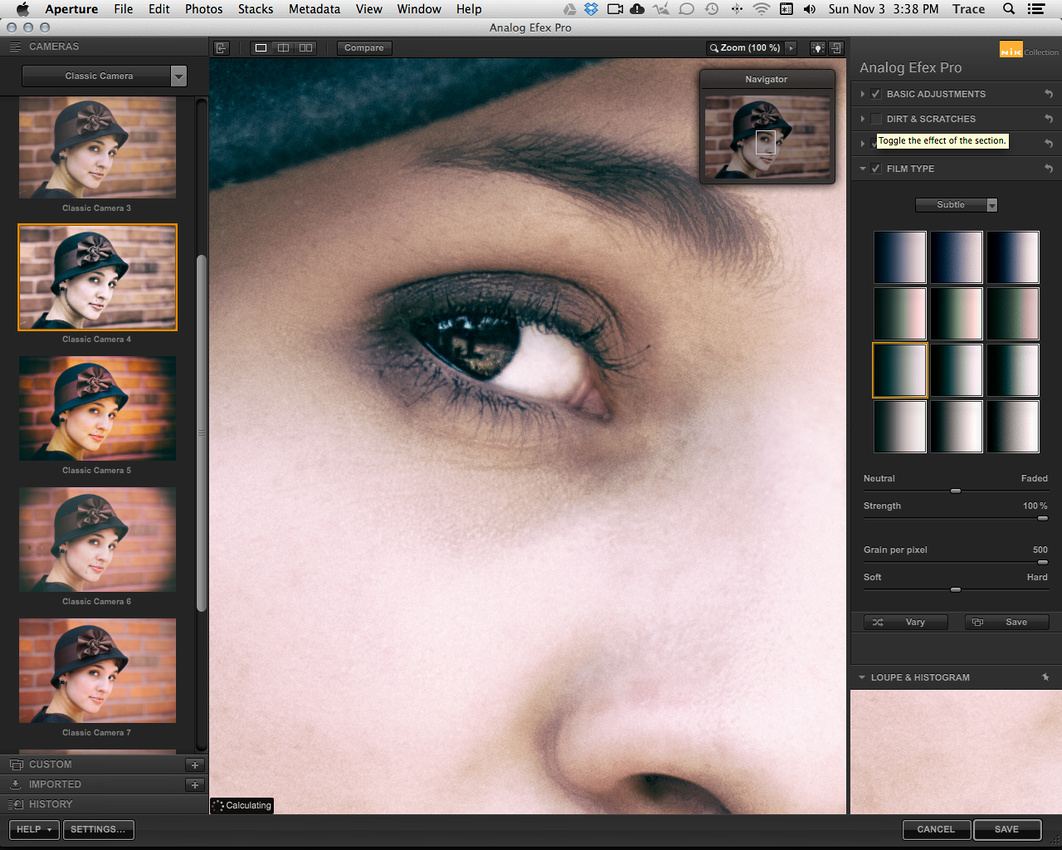 The newest edition to the film simulation applications is an update from the Google/Nik Collection called Analog Efex Pro. This is a free addition if you already own the Collection, which includes Color Efex Pro and Silver Efex Pro. It is also, in many ways, one of the more limited programs in terms of what you can adjust. As of now, it doesn't have any of the U-Point technology that made Nik famous before Google bought it. Using different "Camera" categories rather than any nostalgic film names, this app feels more like Google's Snapseed on steriods. It is rich in what it offers, but it does feel limiting compared to the other offerings in the Collection. 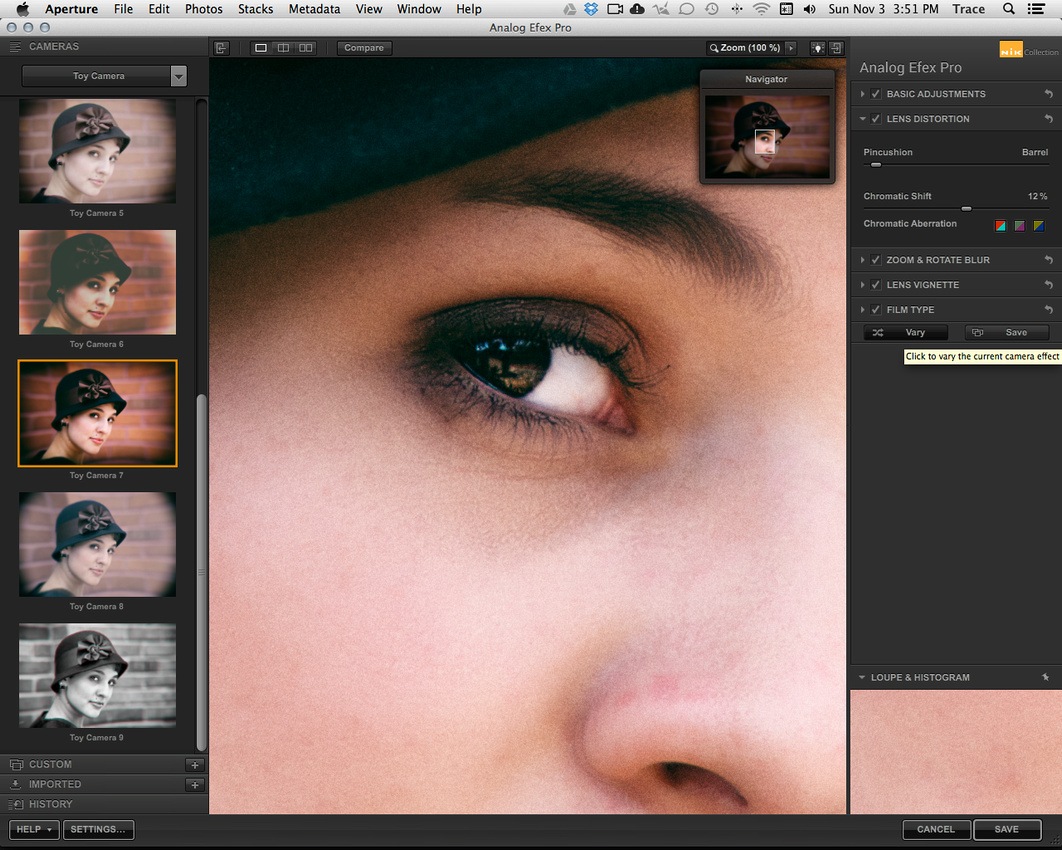 From Toy Camera simulations, and the ability to toggle through variations in some effects, just like you can in Snapseed for iOS or desktop, 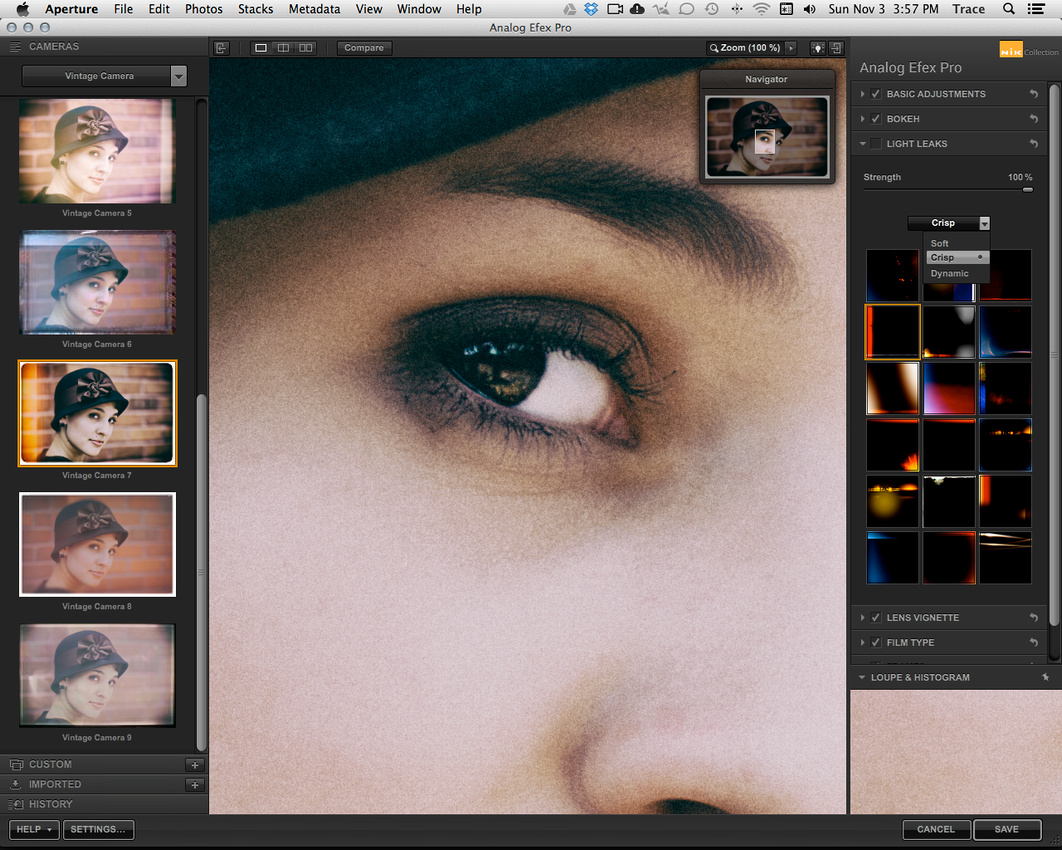 to a Vintage Camera mode with different choices to simulate light leaks, Bokeh, and a number of other adjustments, as well as a camera mode that simulates the Wet Plate process similar to tintypes, Analog Efex Pro is situated not so much between Color Efex Pro 4 and Silver Efex Pro 2, as film simulators, but as a separate camera simulator with robust post-processing features. 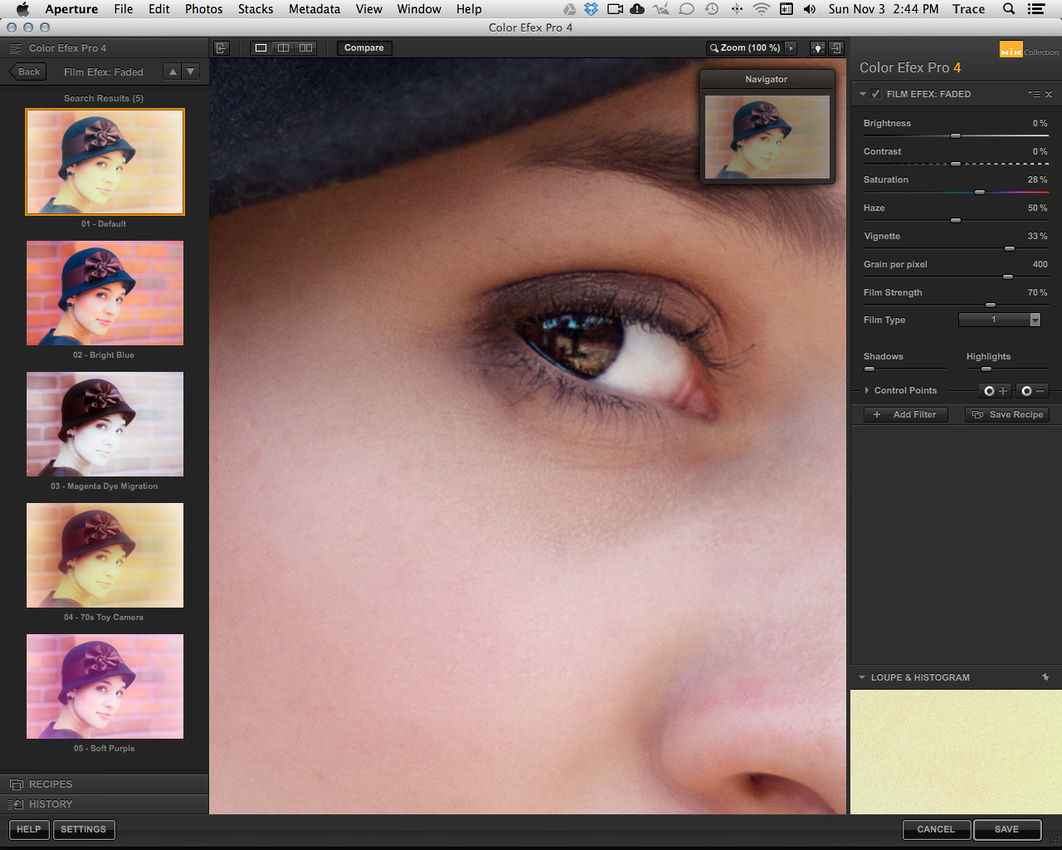 Color Efex Pro 4 has been my color film simulator of choice for some time, as the ability to control so many nuances of the process is wonderful. 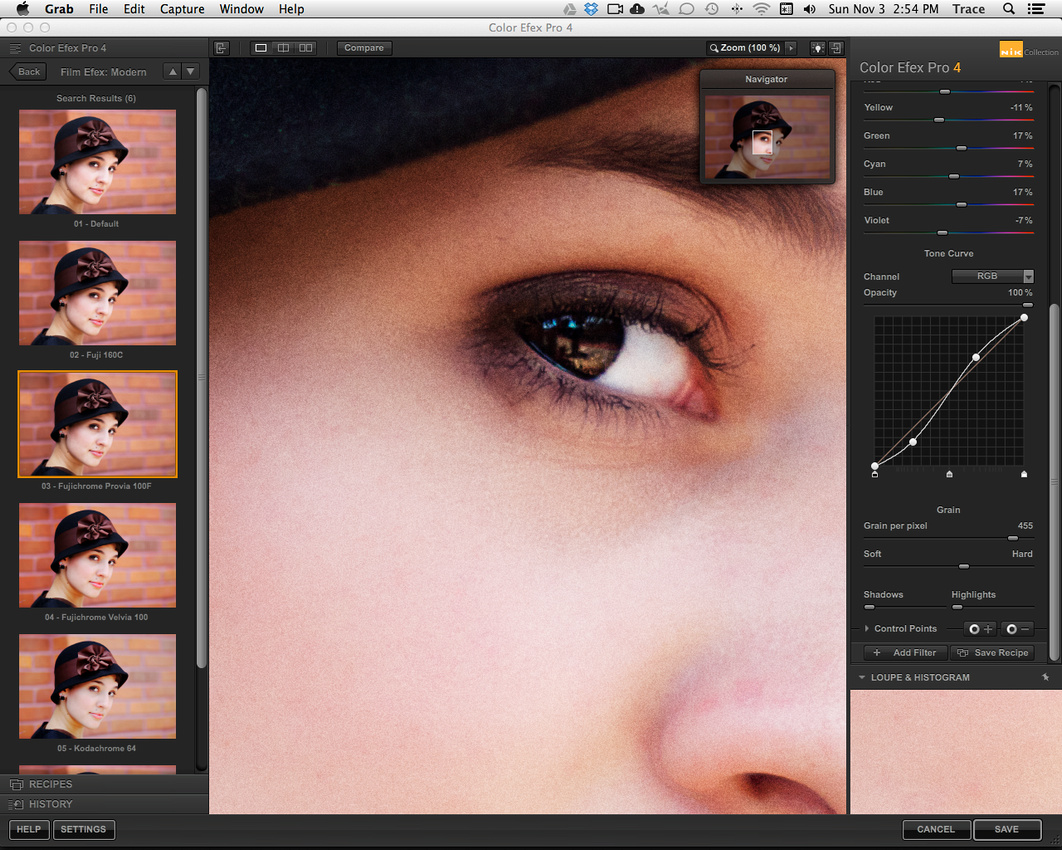 Using traditional film names and simulations is also a plus with Color Efex Pro 4, especially for former film photographers like me. Most of these software companies claim that as part of their process, they have incorporated actual film stock scans to replicate the grain structure and pattern as well as tonalities. I'll take them at their word, as I know most of these engineers are die-hard photographers with a passion for this process!

One really nice thing about working with these filmic features is the ability to create and save your own presets (or recipes). Make your own "secret sauce" as it were. This is like making your own film on the fly, something completely impossible in the limited analog film days! 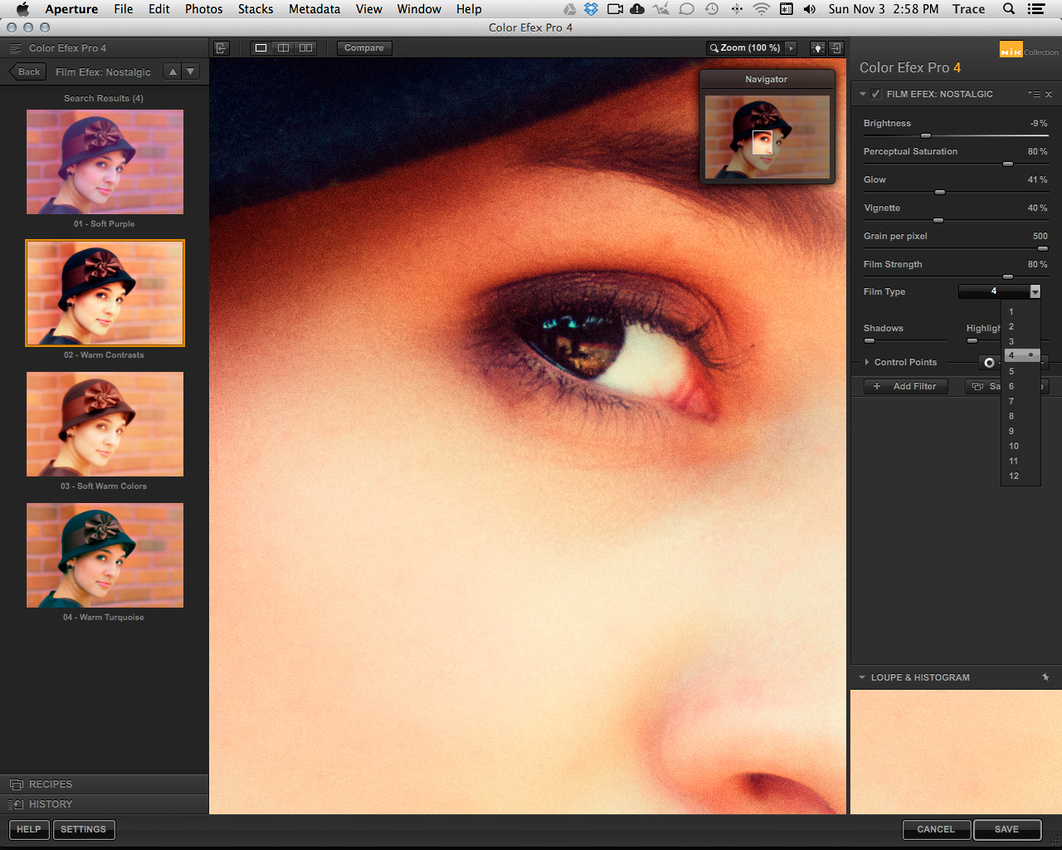 The versatility almost seems limitless, no more so than in the choices for black and white films: 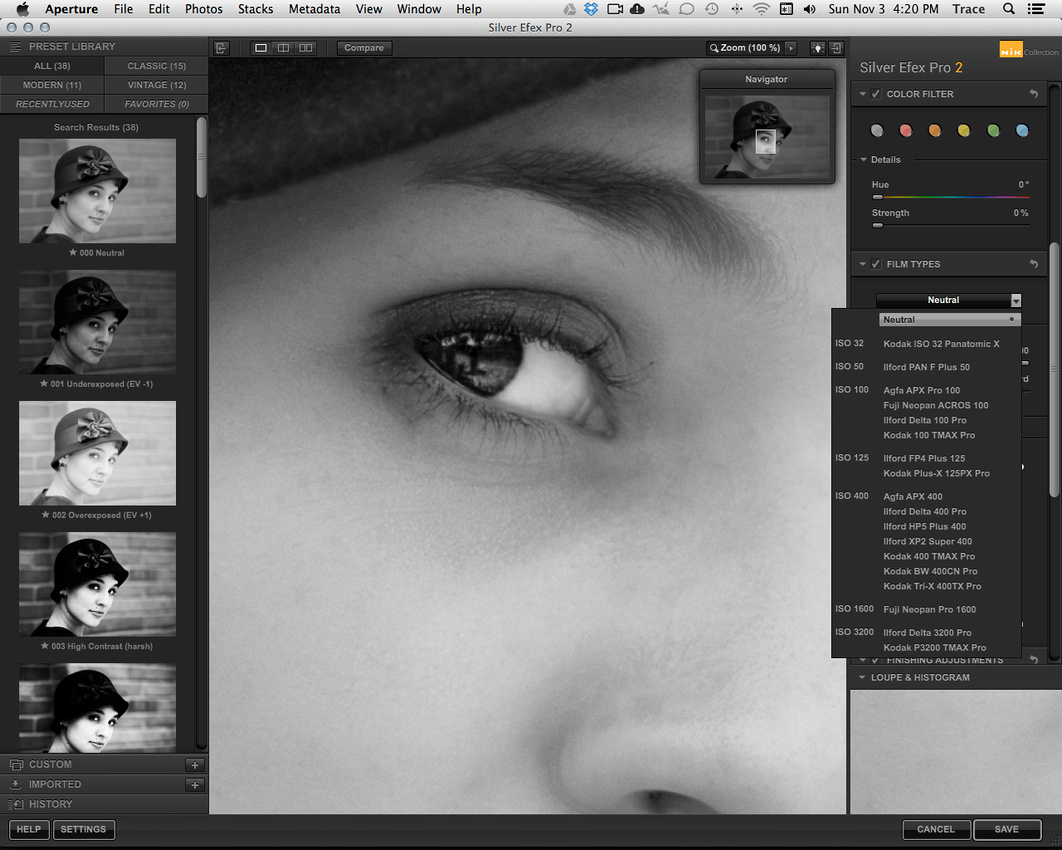 Silver Efex Pro 2 quickly became the de-facto preference for many photographers when it hit the market (in the pre-Google buyout era). The ability to simulate beautiful B+W film images quickly and accurately, without having to use or learn complicated Photoshop techniques was liberating! Adding Silver Efex Pro to a photographer's workflow, along with other techniques could produced rich images worthy of any gallery. 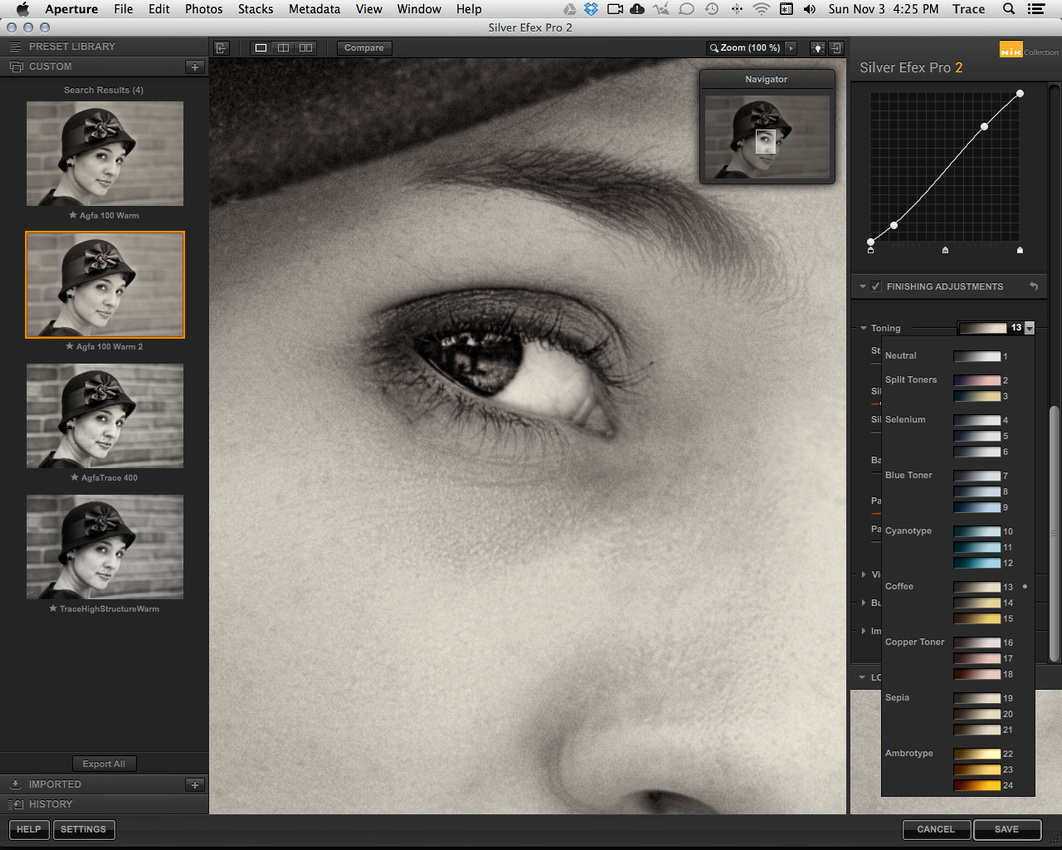 I have several presets (recipes) in both Silver Efex Pro and Color Efex Pro that I would be loathe to do without, or even try to simulate in any other program. They all just tweak things ever so differently. 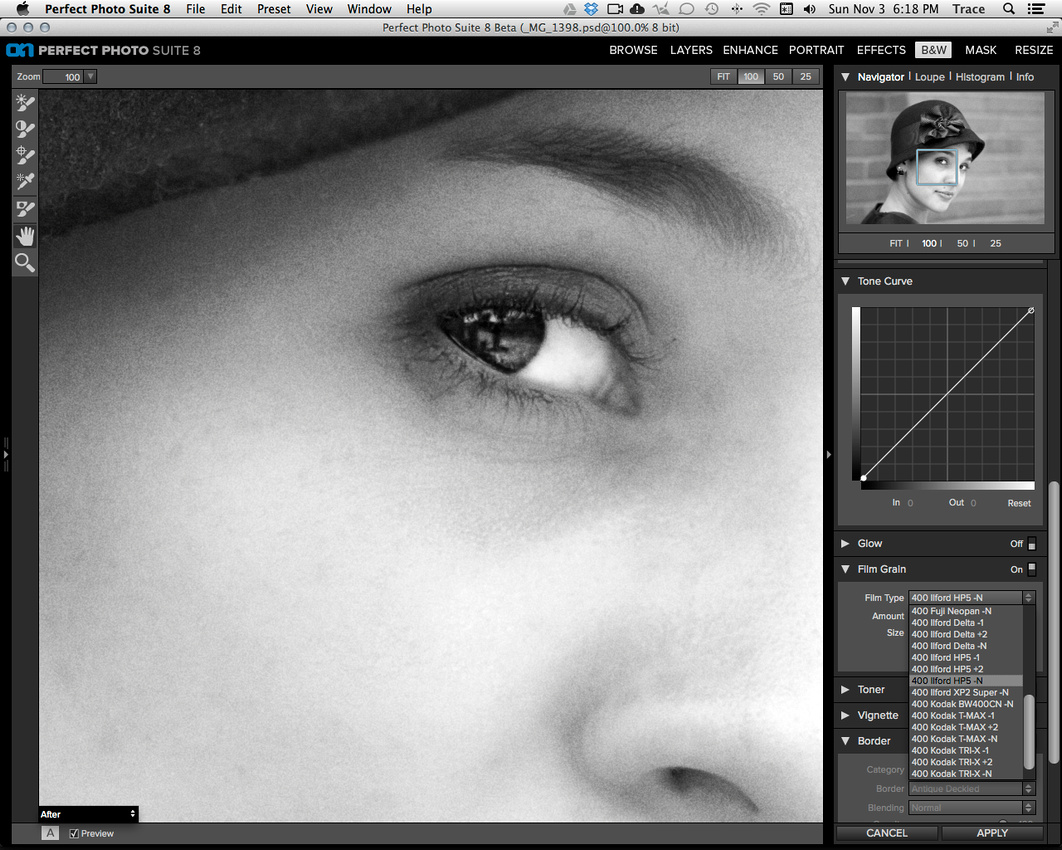 OnOne's Perfect Photo Suite 8's B&W module also has great potential and offers lots of customization. For those that like an all in one program that offers color and black and white options, OnOne may suite your needs. That said, I am learning to appreciate the different qualities each program offers, but I do have concerns that the Google/Nik offerings in the future (updates to both Silver and Color Efex) may change to be more inline with the new Analog Efex Pro experience. It's hard sometimes to go with changes, especially when you have your digital darkroom just so!

For me, not only is the quality of the software's output important, but the experience of using it is too. The tools, UI, and ease of navigation within a program all matter. That's why I'm really liking AlienSkin's Exposure 5: 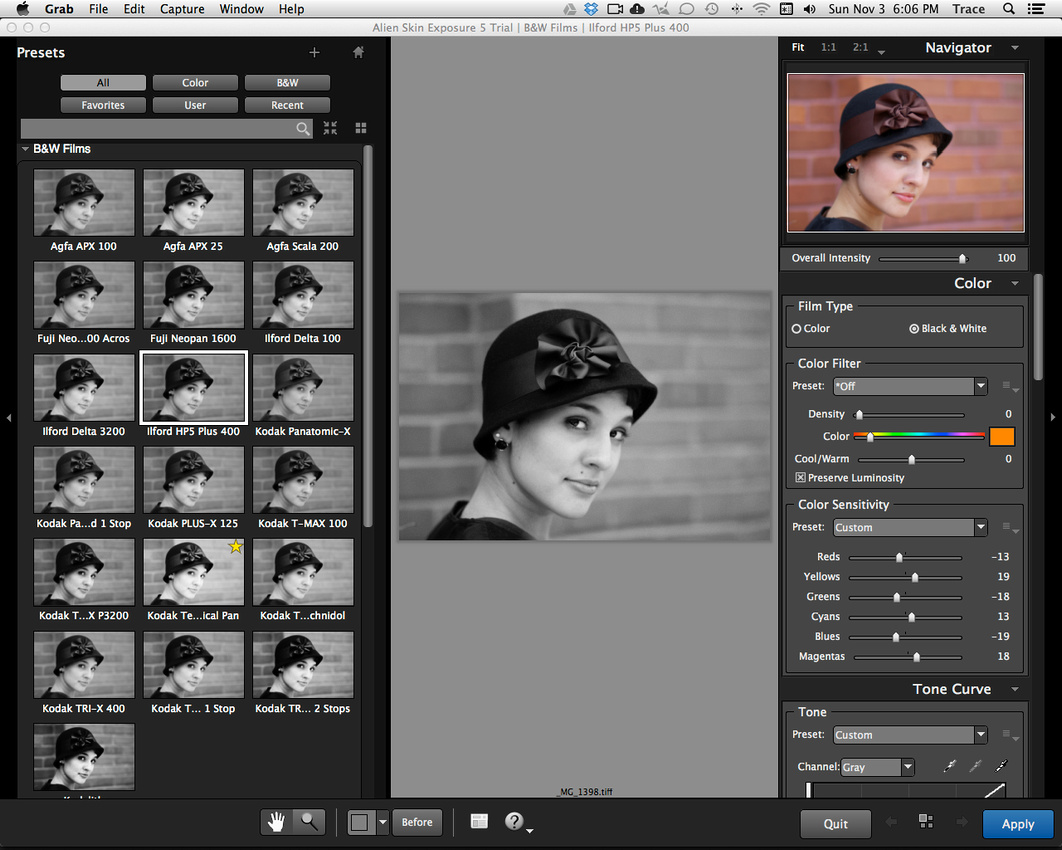 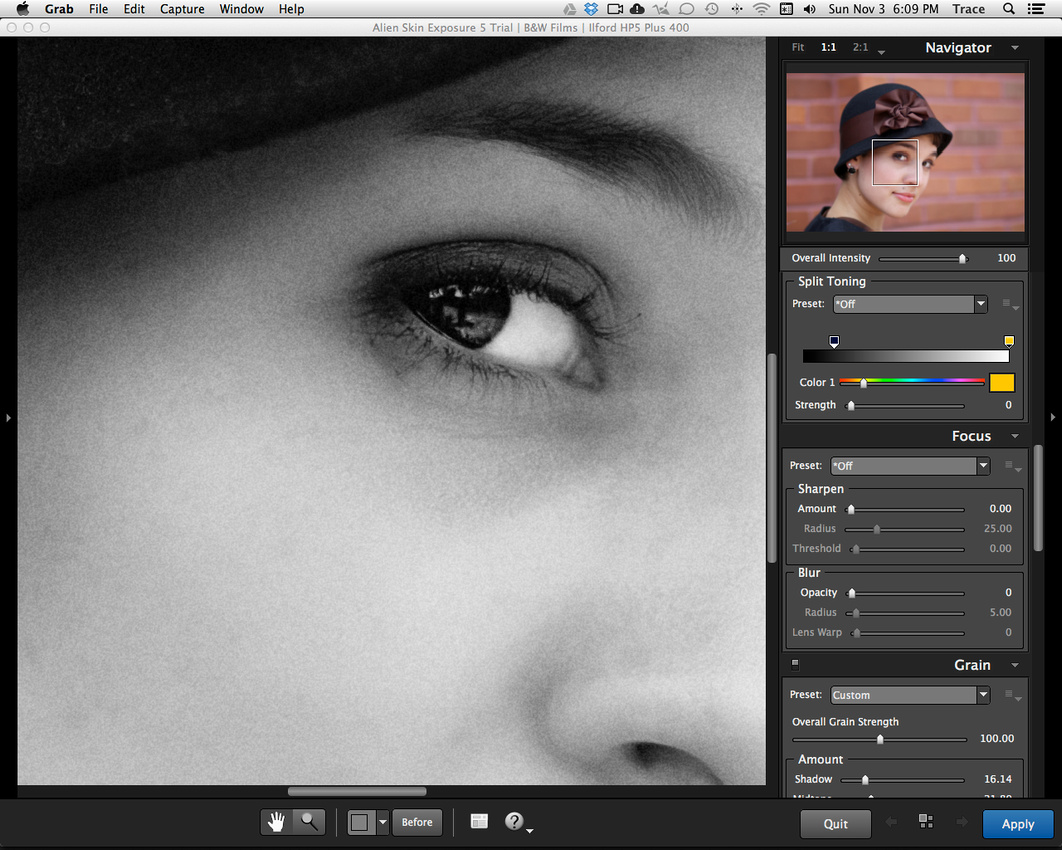 This program, available as a plug-in for Aperture, Lightroom or Photoshop, or as a stand-alone, is chock full of features for both color and black and white images. I'm just now exploring this, but I can already see it becoming a staple in my workflow. The film simulation quality is so far superb, and the robust tweaks you can do are amazing.

One last, but certainly not least option is VSCO Film, which if it didn't start the film simulation craze, certainly popularized it! Now VSCO Film works very differently from all the other simulators. First, it is available as a plug-in for Photoshop (utilizing Adobe Camera RAW), Lightroom, and Aperture. For us Aperture users, it works differently than in the other two, since it uses the built in "adjustment bricks" such as Curves, Color, Dodge and Burn (for grain) and more, that are unique to Aperture. Also, since Lightroom and Photoshop (ACR) are the more popular programs for image editing, they have the lion's share of the VSCO Film love which has updates to VSCO Film 04, while the Aperture plug-in has versions 01 & 02 only.

Honestly though, as an Aperture user, I'm good with that. The other pretty cool aspect to using VSCO Film as your film simulator of choice, is the fact it sits inside your program as an effect or adjustment, and unlike most plug-ins, it doesn't take you out of your program into another interface. If you don't like plug-ins because of that, I highly recommend VSCO to achieve great results.

When I'm asked about which one to choose, which program is better, best, bestest, I tell photographers to sample them all (most offer free trials), and see which will give you the images you want. It really is a salt-to-taste proposition. I'm still working out my preferences, but that is currently leaning towards AlienSkin Exposure 5, with its full color and B+W features, and easy to use UI.

Call it the latest trend, a gimmicky style, or simply a passing nostalgic fad, I see this film simulation as another method to create compelling images with a unique quality that does what I ask any image to do: astonish me in some way!  That doesn't mean the image needs to be anything over the top. It can be as subtle as a gesture, the quality of light, and the depth of a shadow.

trace photographs
Thanks for your post Cedric! I agree, this is not a trend or gimmick, but another addition to the "chemistry" of post-production that can lead to simply enriching images. I also believe as you do, that the really good examples will be from photographers that go beyond the preset stage and add their own sensibilities to to the mix. I think the old-school film names will eventually drop away, but you do need some reference point to differentiate the types, and if they are using actual film grain scans in the algorithms, that's as good a name as any. Should be interesting to see where these programs/apps go in the future...
Cedric Canard(non-registered)
I would say all of this is neither a trend or a gimmick but there is certainly a lot of nostalgia involved. I suspect the engineers that work on these filters are indeed old dudes who are hanging on to the old days for dear life by giving these filters film names. Most photographers these days wouldn't have a clue what Velvia means in film terms, or Ilford or any of the old film names. I've got nothing against the use of filters, they are the way of the future for most amateur photographers and I am all for anything that helps people feel good about getting creative. But where artists are concerned, people like yourself Trace, you and they will use all these filters in amazingly creative ways that will require as much work as was required in the pre-filter days. It's not apps and filters that will turn people into artists, it's vision and work.
No comments posted.
Loading...
Recent Posts
Aperture :: Iterations and Variations The Perfect Pairing :: Aperture and Exposure X5 Aperture :: And The Unsupported Image Format The Continued Case Against Software Subscriptions Aperture :: Make It Big Tools Too :: Photography Gear Matters ~ Or Does It? What I Want ~ Aperture '21 Photo Editing ~ The State of the Art Aperture, Noise and Film Grain:The Quest for a Filmic Portrait Black & White Done Right!
Keywords
Photography The Creative Life Inspiration Learning Creativity Imagination Invention Art Software Aperture
Archive
January February March April May June July August September October November December
Subscribe
RSS
Copyright © trace photographs All rights reserved
User Agreement
Cancel
Continue