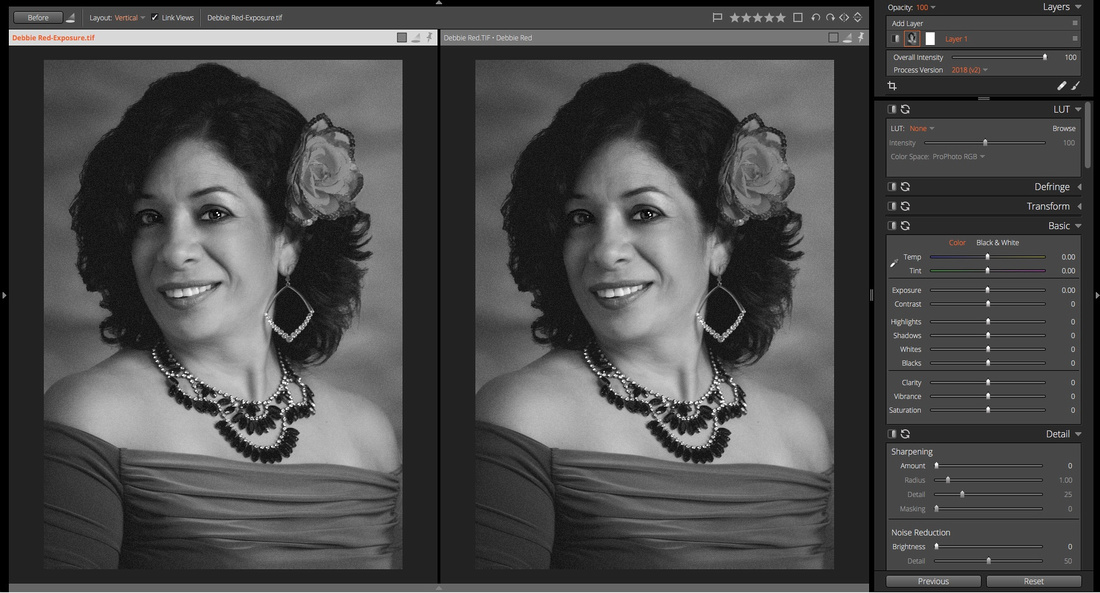 As an artist and photographer I'm not one to go by numbers and formulas... usually. I was trained early and well in the structures of the camera and the mysteries of the alchemical Black & White darkroom. I followed the instructions on developing film and processing negatives into prints until I forgot the numbers and it all became intuitive. But sometimes we need a reminder of the numbers and why they matter.

This brief but illuminating video on using Affinity Photo to create truly accurate black & white images is a must see if you are serious about your B+W conversions. Think you (or your program of choice) is doing it right? Think again. Now that you've watched the tutorial video (wasn't that a great history lesson on Color and B+W televisions?) and absorbed the lesson, let's carry on. Like in the video, I created my own B+W preset in Affinity Photo based on the formula. But not only that, I also decided to create my own LUT based on that setting and saved it to use in Affinity Photo on iPad as well as import into my Exposure X5 LUT folder. While I do have several B+W LUTs in Exposure X5, this one is based on a true, accurate conversion.

The image above shows my new LUT applied on the right. On the left is a virtual copy of the original color image processed in the NIK Silver Efex Pro 2 plugin, which at one time was the industry standard for B+W conversions. I used the base, neutral setting.

NIK Silver Efex Pro 2 doesn't show you any changes in the color sensitivity settings, so whatever formula the program uses is consigned to a secret sauce. You can easily tweak the colors to create different looks, but there is no way to know what are the accurate settings. As you see in the side-by-side comparison, NIK SEP2 appears to brighten the reds and magentas which notably affects skin tone. I much prefer the accurate LUT version on the right better as a starting point. 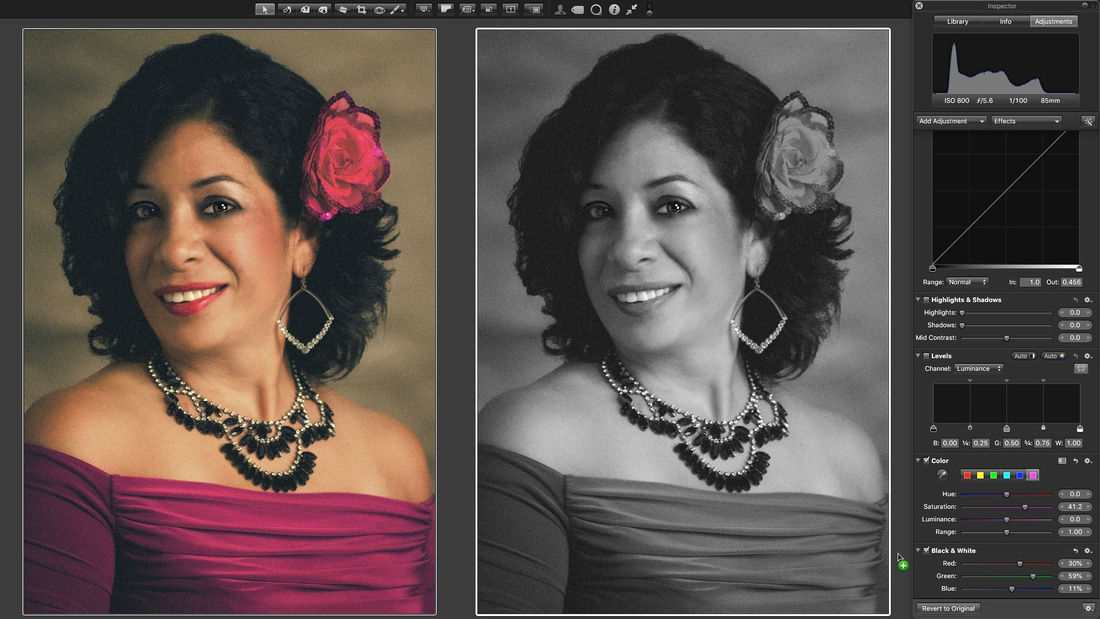 So on a whim I decided to see how Aperture faired in producing its B+W conversion. I was really surprised not only in how at default settings it rendered beautiful, subtle results, but how it automatically displayed the exact formula mentioned in the Affinity video (I did not change those settings, that is Aperture's default setting!) Now that's not the whole story: 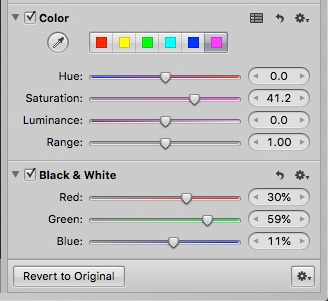 The Black & White Brick in Aperture only has controls for Red, Green and Blue. So using the Color Brick in combination to adjust the Yellow, Cyan, and Magenta settings according to the accurate formula creates a virtually identical conversion to the one created in Affinity Photo (or my Exposure LUT.) This is really cool stuff to see for me. I'm quite impressed with how the Aperture engineers were thinking in this level of detail. 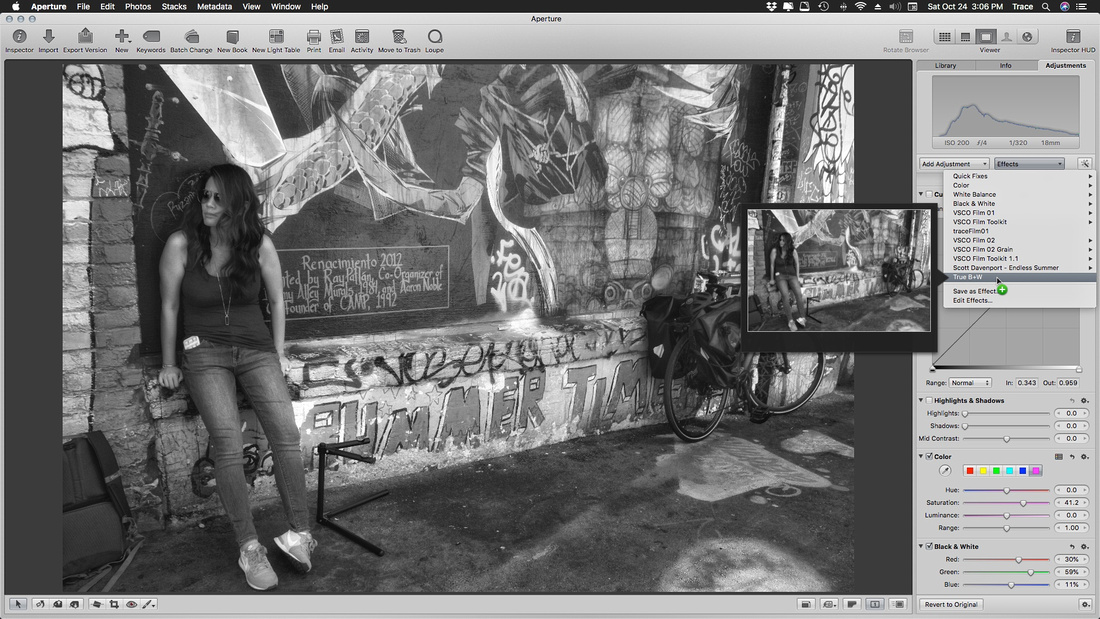 And just so you don't have to remember the formula each and every time, you can save the B+W and Color Brick settings in the Effects list (I saved mine as *True B+W*). This is seriously cool! To keep the whim of curiosity going, I tried the same color image conversion using Capture One Pro's B+W tool. 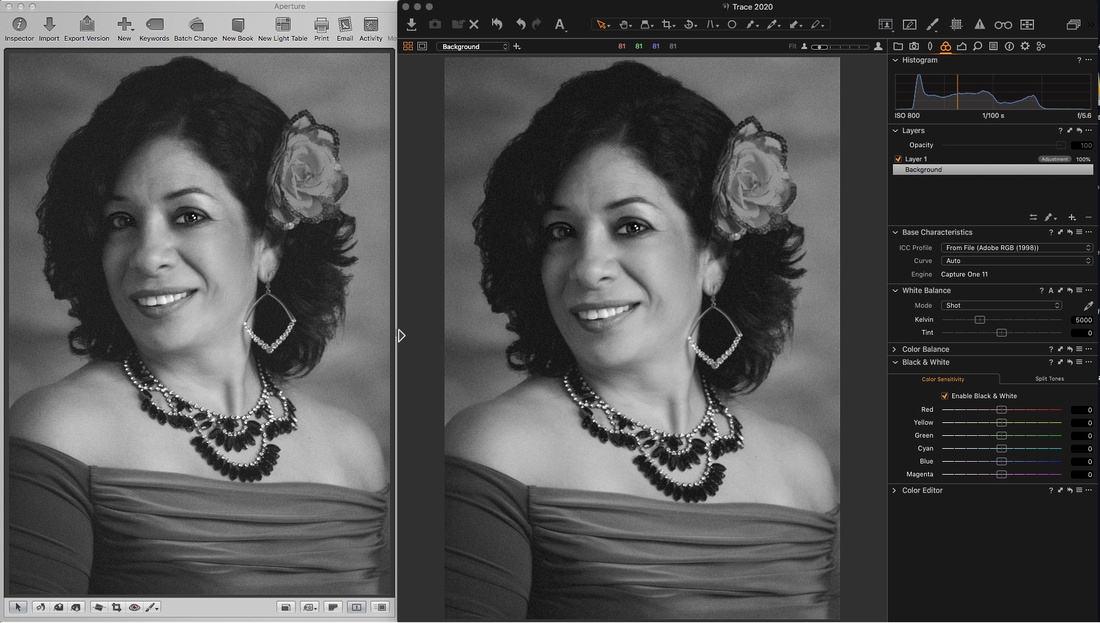 Side-by-side comparison of Aperture (left) and Capture One Pro 11 (right) shows how different each renders a B+W conversion. Capture One does not show any adjustments to the color settings, so if it uses the accurate formula we don't know (I suspect not). More secret sauce I guess we don't need to know about. It does appear to add a touch more contrast overall which as a base setting I don't care for. So I'm grateful to learn something new and see how I have not been being true to the medium of B+W and simply relying on software that is not always (if ever?) truly accurate. And now you know too!

Having been classically trained in B+W photography, I have a great appreciation for those who practice the craft to the highest standards. Photographers like Herb Ritts are a great inspiration and a reminder to ever strive for excellence.