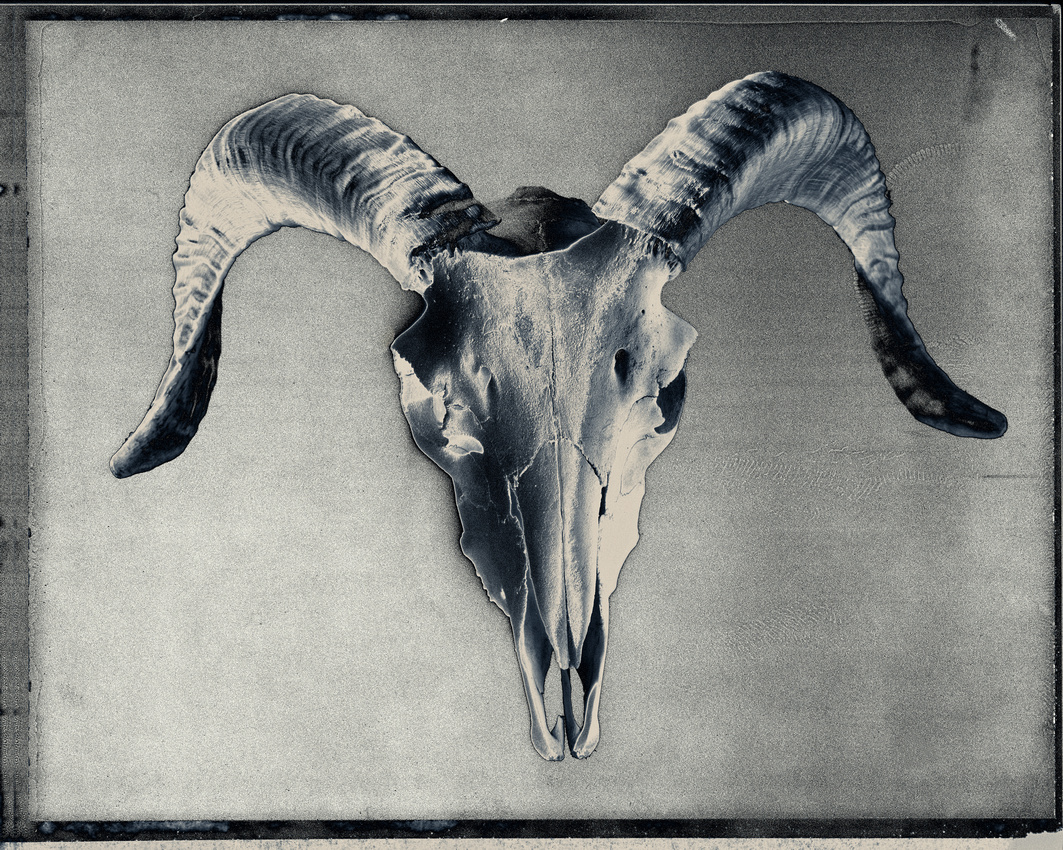 This image of a ram’s skull was fairly simple to photograph, it was in the “processing” that the qualities really brought about its magical potential. First, the rigging: I draped a large black velvet cloth backdrop that I cut an X slit in the middle of. Next I rigged a stand behind the velvet with a pole sticking through the X and mounted the skull to the pole so it “floated” in black space. I wanted the subject to be far enough away from the background so it would go as black as possible with no fabric texture.

I set up a single light to the left to get as much texture and detail on the skull. What you are seeing here is a negative image from a Polaroid Type-55 single sheet film. With Type-55 you get a positive Black & White print, plus a usable negative film sheet. I love the organic, analog processing marks of Polaroid films, mostly limited to the edging “marks.” They are so popular that several digital programs like Exposure X and OnOne have built in “Polaroid film edges” to apply a fake Polaroid look to digital images. For my original images, I often trimmed my Polaroid edges to get a cleaner, unique look.

For the most part with my Polaroid work, the Black & White images at least, I was not interested in the print, I was after the gold nugget of the negative film. When you pull apart a T-55 Polaroid, you dispose of the “shuck” and separate the negative which has a bluish processing gel on it. I discovered that by immersing the wet 4x5 inch negative in a shallow tray of warm water and dish detergent, I could “clear” the gel from the negative. I used a smooth clear piece of glass in the tray and would gently rub away the gel with my fingers (sometimes the gel emulsion could be a little stubborn). Once the negative was cleaned and dried, as in this case, I would tape the negative to an 8x10 black mat board with a 4x5 cutout and mounted it so I could re-photograph it on the 4x5 camera, using it as a sort of horizontal enlarger. By backlighting the negative with a diffusion material behind it you get the results you see here (I put the negative in a film sleeve with a clear acetate front and a slightly textured diffusion behind before taping it to the mat board.) The “texture” you see in the background is a result of the emulsion rubbing residue on the film (my finger prints are included) plus the acetate sleeve diffusion. Things like this is why each image has unique, one-off qualities. To finish this image, the Polaroid negative was re-photographed onto 4x5 color chrome film which is a positive film.