Aperture 3.3 :: Reports Of My Demise Have Been Greatly Exaggerated! With apologies to Mark Twain for the title, I'm here to say that Apple's pro photography application Aperture is very much alive and well. It seems whenever a new iteration or version of Aperture is released, the internet lights up with comments, reviews, and blog posts proclaiming it to be dead-in-the-water, soon to be abandoned by Apple, less a professional app and more amateur oriented, not as good/powerful/useful as Lightroom, or why someone is switching from Aperture to Lightroom.

All I will say about Adobe's Lightroom app is that I have tried to love it. I have every reason to want to love it, I simply don't. For me, Aperture is more powerful, better designed UI wise, and faster to use than Lightroom. Choose the tool that works best for you, regardless of what anyone else says, including yours truly.

Apple updated its professional photo app Aperture this past week at their WWDC 2012 conference. Although it is a point release (from 3.2 to 3.3) rather than a full blown version update to 4.0 as many were hoping for, it is still a major release. 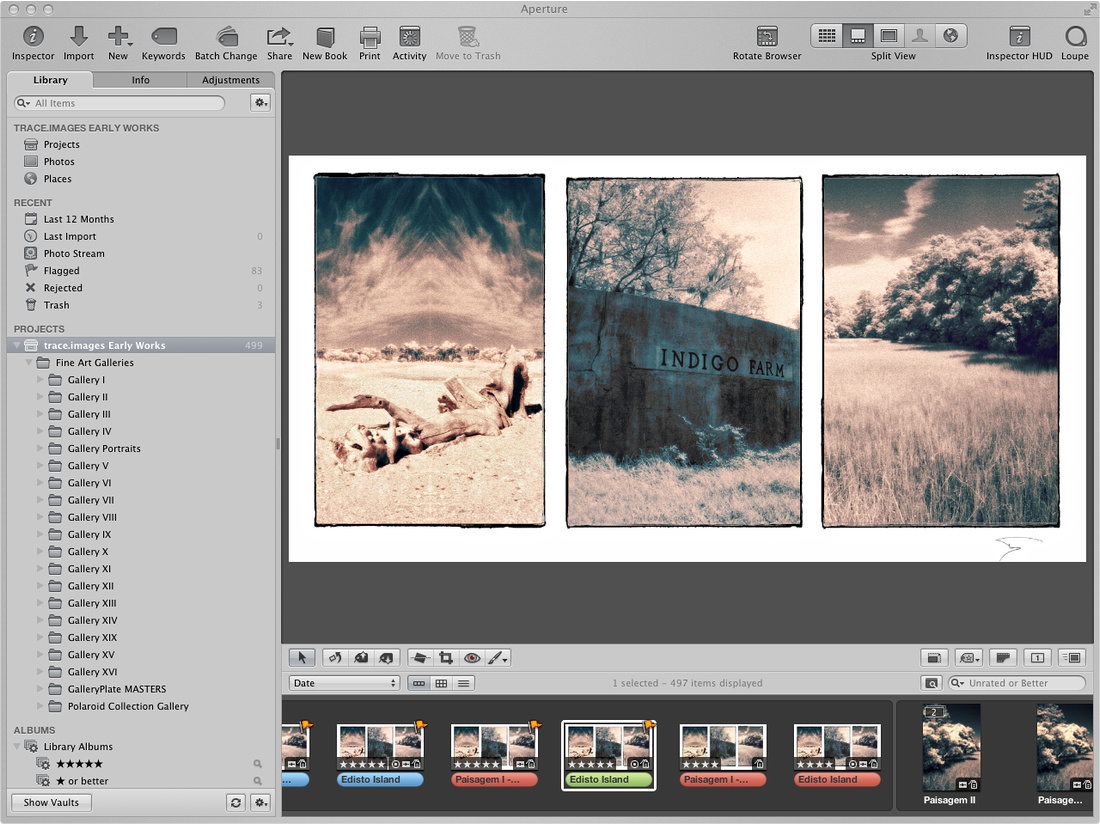 One of the first things you notice when you update to Aperture 3.3 is that Apple has jettisoned the color from all of the icons and library projects/folders. Many people decried this change as confusing, but after a few days working with it, I find this change gives the app a more professional look and feel. The cleaner monochrome look, coupled with the better designed, updated icons on the tool bar make this an easier to navigate program.

You'll notice another change from the previous version, in that Apple chose to modify the Metadata tab to Info tab. Funny how so simple a thing caused many to claim Apple was dumbing down Aperture. The fact that the two terms are at basics interchangeable, it seems disingenuous for professionals to complain that their application is being made amateur for a simple term change. I for one was not expecting any of these changes in Aperture, but I'm glad Apple puts so much attention into the little, nuanced details. Its what makes Aperture such a joy to use.

But the biggest changes come in the Adjustments Panel in the form of some rewritten tools, rearranged elements, and new features. 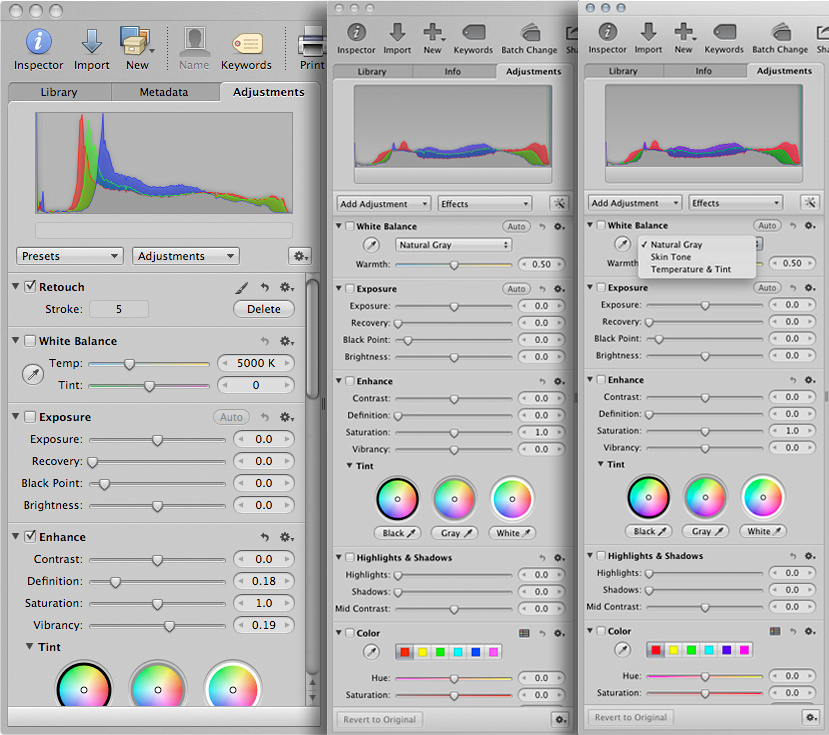 Just below the histogram, Apple changed and rearranged the three button: Presets is now Effects, and Adjustments is Add Adjustments. Though this change is more in keeping with those coming from an iPhoto paradigm, I do think the Effects name downplays the idea of Presets as a term. A little thing we will all get used to, but still, somethings didn't need changing. The cog wheel that was under the histogram to the right has been moved to the bottom bar. As pointed out elsewhere, this is another change that doesn't make immediate sense, as the cog wheel sets the histogram parameters. The only thing I can come up with is most photographers likely didn't keep changing the histogram once we set it (I never did), and that particular area of real estate was better suited for a new tool called Pro Auto Enhance, indicated by a magic wand. This tool, which actually makes several adjustments at once, is a very powerful way of making a quick correction to many images.

Other very welcome changes include a whole new White Balance brick that allows for several new choices. By default it is set to what Apple calls natural gray. This works great for most images, but if you have people included you can choose Skin Tone white balance which does an incredible job. If you want the old Temp / Tint white balance, you can use that too.  Equally cool is the ability to now paint in or paint out your white balance. This is huge for many applications!

The Highlights & Shadows brick has been rewritten so that each of the three sliders now does what you used to do with seven sliders. The Mid Contrast slider is now more powerful, combining several adjustments and new algorithms to give you great results. I do like the implementation of the Revert to Original button on the bottom of the panel. I like the name change from Master to Original.

All things said, I'm excited to use this newest version of Aperture, and if I have any thoughts about when we will see a full version 4, it will likely be sometime after OSX Mountain Lion is available. As Aperture is so tightly integrated with the OS, and takes advantage of certain core features, I think Apple is optimizing Aperture 4 for the new OS. So far, I love where Aperture is going, and all of this, plus the fact that it has been optimized for the new Macbook Pro with Retina Display, shows clearly that Apple is fully behind the application.

For the best resource on all things Aperture (outside of Apple's website), got to ApertureExpert and explore this powerfully creative application...

P.S. there is a wonderful podcast about the Aperture update (and more) on TWiP, hosted by Frederick Van Johnson... check it out.