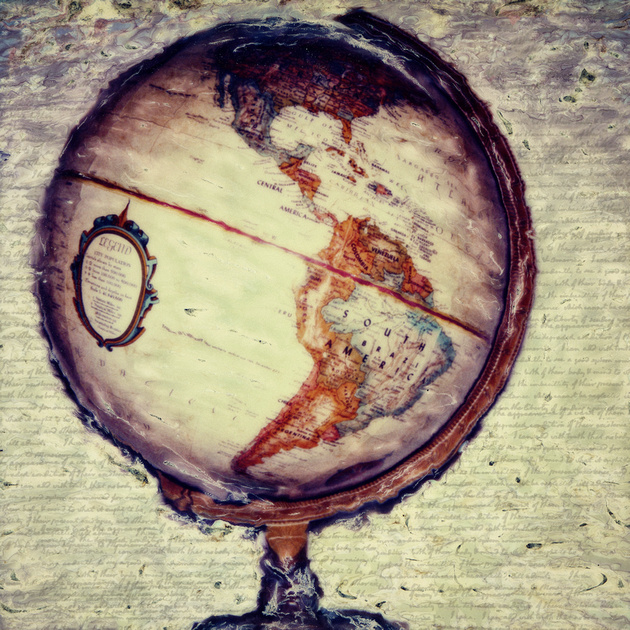 I've created a new, one-off series called Ten Polaroids to showcase work created over the years with this incredibly versatile film material, and as a bit of an antidote to the totally digital world of photography we all swim in. Sometimes, for those photographers with a background that straddles the analog film and digital age, there is something beautiful in connecting again with what I call "material photography."

Today, making a tangible print from a digital file might constitute a material photograph, but what I'm writing about is a more versatile, maleable type of medium that could be used creatively far beyond its intended use. Without going into a long history of Polaroid Corp. (that's what Google and Wikipedia are for), suffice to say here that rather than a single flavor of film, Polaroid made a great many types of film for many purposes. Some films were intended for amateur use by our parents and grandparents mostly, along with inexpensive cameras used to capture and process those images. What house didn't have a Polaroid camera around somewhere?

A great many other films and print material were created by Polaroid specifically for the professional commercial photographer and special scientific uses. Professional photographers had access to Polaroid films ranging from medium format size to 4x5 and 8x10 large format camera sizes. Available in both color and black and white, these films were primarily intended as proofing materials for photographers. A means to check focus and exposure, as well as composition before putting the final image on "real" film. Polaroids were most often discarded in the trash as soon as everything checked out, and we were ready to go to film. Purpose served.

But a funny thing happened after years of seeing Polaroids as simply a means to an end. A small number of mindful photographers, unknown to each other and working in separate studios far from each other, began to notice the discarded Polaroids left to dry in the trash had actually transfered  their image onto another material the Polaroid had come in contact with. Either creatively bored, or immensely curious, these photographers individually began to play with the film in a deliberate manner. They started to get other Polaroid films, ones they didn't normally use like the amateur films, and experimented with those too. Slowly, without the internet or twitter, word started to get out, and other photographers who saw the resulting images began to play with the materials too.

The professional Polaroid films we most often used for commercial shoots came in two sizes and types. 4x5 inch Black and White Type-55 gave us both a print and a negative. Creatively, the gel coated negative was the prize! Once you rinsed off the gooey gel, you had a beautiful black and white negative you could do anything with. Print it in a darkroom, sandwich it with one or more other negatives for multiple exposure effects, scratch it, scrape it, rub it, distress it in ways that digital grunge filters mimic today. In fact many of todays digital filters and grunge effects come out of the original experimentations with Polaroid films! One thing I liked doing with the Type-55 negative was to re-photograph it onto another Type-55 Polaroid and create a film positive, with all of the fine tonal nuances only Polaroids had.

The color Polaroid film in the 4x5 inch format was Type-59. This is what truly started the Polaroid Art craze. Those creative photographers who started experimenting with the still wet color emulsion, discovered that if you pulled apart an exposed color Polaroid before it was finished processing (usually 60 seconds), you could, very, very carefully take that emulsion side and transfer it to another substrate, such as watercolor paper. Now when I came across the technique while working in New York, a friend and fellow photographer was doing it, as he had learned it from one of the original discoverers of it. Sadly, my friend was of a secretive nature, and wouldn't tell me exactly how it was done. I knew it involved Type-59 film and watercolor paper, but all my attempts ended in failed images.

So I decided to find a number and call Polaroid Corp. directly, to see if they could be of help. The fellow I spoke with at Polaroid had said they were only just beginning to hear of some photographers creating art from their materials, but even they were in the dark on most details. Its craze hadn't yet reached the epic proportions it would later. He did tell me that, as far as he knew, the process involved wetting the watercolor paper first, before applying the color emulsion image. That nugget of information was all I needed to go all in on the Polaroid Art craze!

From there I worked all manner of Polaroid films in creative ways. I looked at the materials as completely maleable and infinitely manipulative. I would shoot a Polaroid, either color or black and white, and then re-photograph, and re-re-photograph each iteration in different ways to see what could be done. I used various techniques of Polaroid manipulation in commercial assignments, as well as my fine art work. It is a testament to this useful, but "lowly film" material that even to this day, there are software programs like Nik Software's Color Efex Pro 4 and onOne Software's PhotoFrame 4.6 Pro  that try to emulate digitally the Polaroid experience. Sadly, or perhaps not, nothing can compare to the rich and subtle "creamy", tactile qualities of this now defunct material.

Something in Polaroids' secret mysterious sauce is un-duplicateable. One very big feature, and it is what makes Polaroid Art so completely unique, is the fact that no matter how many times you pulled a 'roid, each image was a one-off, never to be matched. The ultimate Limited Edition Print!