We Were Mod Once :: Last Of My iPhoneography Books 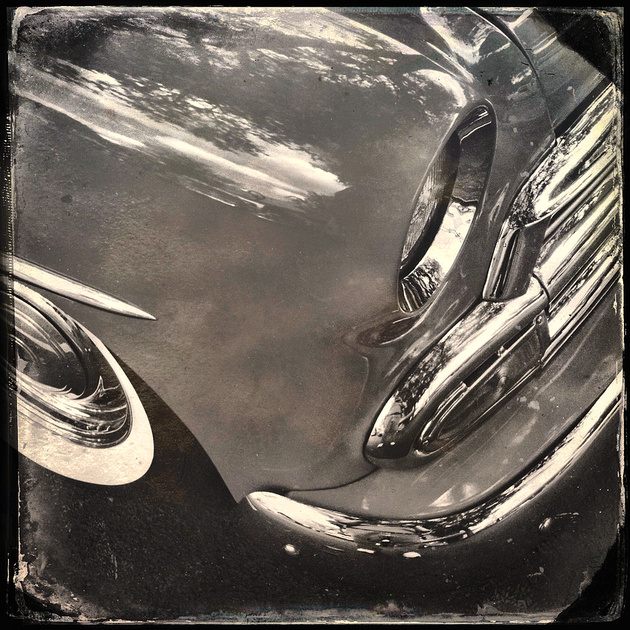 We Were Mod Once

Feeling nostalgic for things we grew up with is as natural to humans as breathing. We're simply wired for nostalgia. Some of the things we grow up with aren't only from the time but include things from earlier times too. Things from our parents and grandparents days filter in with what we see as uniquely ours. Music, movies, dances, clothing styles, cars, and styles in art all are things we can feel nostalgic for.

For my last iPhoneography Book (X), I chose to do a look at some vintage autos in an old-timey, tintype way befitting the theme. As I type all of this, I'm in a coffee shop that's playing Frank Sinatra and Louis Armstrong. Apropos, I'd say.

There are old movies and tv shows we've all seen growing up that are older than we are, but they have become a part our story. I love seeing old black and white films that show what those times where like for our grandparents, and how cool, vibrant, alive and vital they were "in their day"! One thing I find is no matter the span of years, everything was modern once. Everything was once cutting edge, forward looking, sometimes scandalous and shocking, but always saying something about where the culture is at the time.

Photography and film are great mediums for communicating the nostalgic in us, as well as showing how we're not so different from past generations after all. Take a look at the brilliant street photography of Vivian Maier, and compare it to examples of modern street photographers. Look at films shot on location in New York City from the '30s and '40s, and then newer films that show the same locations. The clothing and hair styles change, as do the automobiles on the streets, but the city, the buildings are essentially unchanged. It's a bit Twilight Zone-like (see what I did there?)

The big trend now for photographers is going to Cuba to photograph the people and the culture (and the cars) there. There is a certain look and feel to images being shot there today that harken back to a by-gone era in our own culture. Old cars, TVs and appliances, among other things trigger a sense of nostalgia in those images, yet they are of a current, modern and vibrant people and culture. Its a bit of a paradox, really.

I'm not a car guy per-se, but I think the style and design sensibilities from the '30s, '40s and '50s reflects a better "cool-factor" than anything we have today, in the way of your average car on the street. They were all way before my time, but I can appreciate how they represented the best vitality and creativity of those times.

So what are you nostalgic for? Interestingly everything we have today that we see as so modern and cutting edge is ripe to be seen through a nostalgic lens... one day.

P.S. And the Mac just turned 30 years old! How's that for modern nostalgia?