Who Is An Artist? 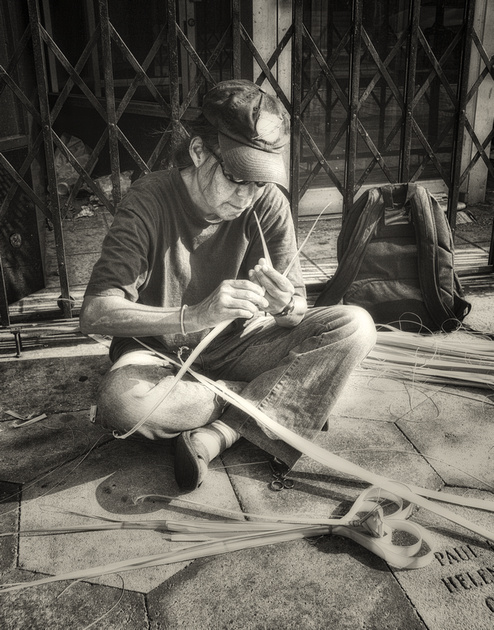 For as long as there has been Art, there likely has been debates about what it is, and isn't. Not as often debated is the question of just who is an artist? There are boxes with labels that read: "Working Artist/Photographer", "Professional Artist/Photographer", "Amateur", "Hobbyist..." too many boxes to mention. The question always seems to bring up the topic of just who is qualified to be called an Artist?

Sadly most people you talk with will say they are not artistic, let alone admitting to being an artist. Is being an artist dependent on a degree from a prestigious institution? Do you qualify to be called an artist because you've had a show in a gallery, and are therefore "recognized" as such? Is it even necessary for anyone to call you an artist for you to become one?

Rosa is an artist. I met her one evening in the heart of Ybor City, FL. Sitting on the sidewalk, getting ready to weave her roses from palm leaves. Jem and I walked up and I asked to take her portrait. She smiled, offered us her first rose of the evening, gratis, and told us her name. She simply kept working as I made several frames, we thanked her and she blessed us, which we returned in kind. It was one of the sweetest encounters I've had in a long time! Such a peaceful, light soul she is! She embodied to me the spirit of a true artist. Worthy of the name in every way.

I don't know her story, whether or not she is homeless, or simply making her roses to sell to couples out on a date. What I do know is we were gifted a work of art by an artist. To me, an artist is one who believes in the power of beauty to transform us. Who sees the world, the things in it, and chooses to transform what they see. I can visit a small peasant village in France, Italy or Greece and be delighted with the many different touches of architecture, painted walls, window boxes and stairways filled with flowers, and the beautiful courtyard gardens everywhere. These people would not place themselves or their creations on the same level as Michelangelo or Matisse, yet these very same villages inspired some of the greatest art.

The true, deep culture of Japan, the one that comes from within her people (not the culture inherited from outside) is one profoundly based on aesthetics. The tea ceremony is nothing short of being a part of a living work of art! Even the way of gestures, and sweeping fallen leaves from the front path of a home have a profound, aesthetic and spiritual quality to them.

Too often I hear in photography that someone is not an artist, or that photography is not art, but really a business, a service business. Yes, it can be. But it is up to us how we approach what we do. If the Japanese people can make a work of art out of the most mundane task, if an artist like Rosa can not only transform a strip of palm into a glorious rose, but touch the life of another in the process, can't everyone who creates images with a camera do the same?

This post is from an earlier iteration of the blog, and is one of my favorite pieces.

The following comments were previously submitted from the earlier posting: Jemfyr Submitted on 2011/07/29 at 7:31 am  Trace, I remember her fingers smoothing the palm strip, curving them into creation; the way she rocked from the waist to the music and her smile seemed to match the rhythm ~ Rosa, an artist indeed.  Thank you for blogging about our experience! You honor Rosa in the most delightful way… here for other artists to read and *remember*… I too will not soon forget. This is one of my favorite pieces you have written. Truly touched!  Cedric Submitted on 2011/07/31 at 7:04 am
Hi Trace, I do like how you write but I have to say I am not sure about this. As you point out at the start of your post the definition of art is not clear cut. In fact it’s quite perplexing and has baffled philosophers for decades if not centuries. If “art” is difficult to define then surely “artist” is equally difficult to pin down.  It seems to me that the word artist is bandied around all too loosely these days. People who have probably never used an original Instamatic camera or a Holga or Lomo, come along with a phone, snap a shot, slap on a hipster-filter and call themselves artists.  Don’t you think that the overuse of this word cheapens the value that a true artist imparts on the world? I am happy to concede that these people are creative even if their intent is nothing more than to slap the photo on Facebook or Flickr and wait for the usual banal comments that result from such action. In fact, I have no doubt that creativity is in our nature and can be driven by any muse, even ego. But I would question their right to being bestowed the title of artist.  Of course I could be wrong. Perhaps I am being elitist though I will point out that I do not consider myself an artist by any stretch of the imagination. And I’ve seen what you do with a phone my friend and it seems wrong to me that some hipster-snap-shooter could be placed in the same basket as you and be called an artist.  But if I am wrong about who can be an artist I still need to question your definition of “artist”. You define an artist as “one who believes in the power of beauty to transform us”. Forgive me for saying this but I find that definition extremely limiting and paradoxically generic at the same time. I would suggest that many people believe that beauty has power to transform us but this alone does not make an artist.
What’s more I cannot even see how beauty would have any power since beauty is perceived rather than being something objective. If beauty had the power to transform then I would think it fair to say that the Amazon would be intact, the oceans would be clean and open-cut mines would probably not exist. Furthermore beauty is only one half of the equation. The world, life for that matter, isn’t all roses and rainbows. To seek out beauty while ignoring that which is not is to seek an unbalanced view of the world and in my eyes potentially detrimental to creativity.  I once met a man who suffered from manic depression. In between bouts of crazed, violent anger he would sink into a dark abyss of despair and on rare occasions spend brief periods of time in some kind of limbo wavering somewhere between his two personal hells. During those elusive moments of relative quiet he would finger paint (he wasn’t allowed brushes) some of the most emotive art works I’ve seen. They were dark, all-engulfing, suffocating depictions of his own inner world.  Somehow, through the paintings he was able to express what life was like for him, something he could never hope to impart with words alone. This man was not peaceful or anything that could be described as a “light soul”. He was violent, he was dark, he was sinister but I readily call him an artist because of the ugliness he so dramatically conveyed in his paintings. The paintings themselves were technically poor, there was no craftsmanship at play here, but the message within them grabbed you by the throat, slapped you across the face and made you choke on your own tears.  To me the lady you met who made the same rose over and over again was no doubt a kind soul and I suspect a fine artisan but do you really believe that it is her rose that conveyed the feelings you felt or the person herself? If you had found the rose on the ground without any knowledge of its maker would you truly see it as art?  Trace, please forgive my long-winded comment which I blame on my insane propensity for this sort of discussion but you did open up an interesting topic :)