A Navajo Rose For Rosa :: And An Artists' Reply 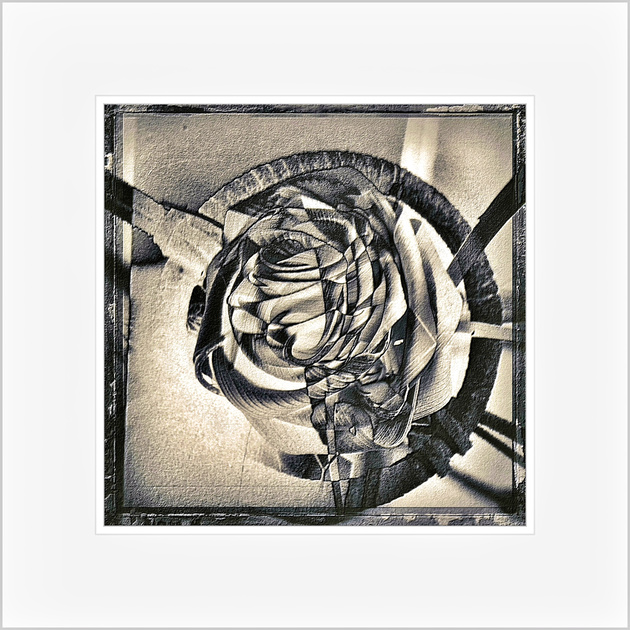 This post is a reply to a very well written response to my earlier blog post, "Who Is An Artist?"  My friend Cedric says he is not an artist, while I beg to differ. While I too think the term "artist" is bandied about all too often, especially the term "recording artist", I think the term as such is not well defined in our current culture. It therefore loses a lot of meaning for most people, and ceases to be relevant.

By the same token, I do not agree that proper artists, as such, are an exclusive, gifted class of individuals, separate from uneducated masses or ordinary people. Cedric complimented me that the usual "art" showing up online these days is simply some mobile phone image with a hipster filter slapped on it, and called "art", by someone claiming the title of Artist. He said the images I have done on an iPhone are far more deserving of being called "art".

Thank you Cedric, but in all honesty, I admit that my iPhoneography is hardly more than the act of playing. The image above (Navajo Rose) is one I created on my iPhone of the rose that Rosa had gifted Jem and I. I had stuck it in a small dreamcatcher that I then pinned to our office wall. I happened to one day take enough notice of it to capture it on my phone. I then "played" with various apps to settle on this final image. I had no idea or intention on how it would turn out. I could never repeat the process(s) to do it again, it was simply pure play.

That, I think is the key to true art, and being an artist; The ability to play, free from any outside intent, any idea of even creating art, the way children do that we so often lose as we "grow up". One of the consequences we see today of the sheer explosion of creative tools for masses of people worldwide is, we are exposed to the "learning process" of creating art. All over the world, at any given moment, we are witnessing peoples successes and failures as never before.

Imagine if we could see the all of the bad exposures, terrible compositions, banal subjects badly exposed of every great photographer in history! If we could see their growth from awkward photo geek to Master Photographer, we'd see their process to be oddly like our own. I actually did some very fine images pretty early on in my career, and later have done some atrocious images that were never as "good" or on a par with those earlier works. My work continues to grow and change, as I do, but one of the really powerful aspects to my process now is the re-awakening of simple play (thank you iPhone!)

Cedric is right, in that simply making "art" all about the beautiful is only half of the equation. James Joyce and Joseph Campbell point out that another factor to be considered in great art is the concept of the "sublime". Great expanses of space, experiences of prodigious power can be terrifying and sublime, and hence felt as art.

The line between "madness" and art can be as thin as a hair. The art of Paul Klee, Picasso and Matisse were shown alongside those of patience in mental institutions in an attempt to show the great art of the 20th century was "degenerate" art. I think instead it showed the deep connection the human spirit and psyche has with both the "beautiful" and the "sublime darkness" we all carry.

And yes, Cedric, I do believe wholeheartedly, that if I had come across Rosa's Rose laying in the street, I would see the art in it. That it was enhanced by the experience of meeting her in person, is like anytime we would get to meet an artist at work. I've picked up detritus in the street because it struck me as having something artistic to it.

I'm so glad I had the opportunity to create a work of art from Rosa's Rose, one artist transmuting another's art, as all human art is a transmuting of the great spirits' art!.

trace photographs
Great, well considered comments Cedric! Still, I believe we know art, and by extension artists, when we see it (them). Lord knows there is an immense amount of art, of all kinds, which certain people think is rubbish, while museums, galleries, and the "art world" as such tout its merits. When Picasso unveiled his "Icarus Falling" mural painted for the UNESCO building, many people didn't know if it was art, are a colossal doodle, a joke the artist was playing. As for Rosa being a craftsman, rather than an artist, for anyone who makes things by hand, no two can ever be the same, no matter how skilled the creator.

Making images in the old darkroom way was also a "handmade" process, and so no two prints could be identical. Today, our digital tools let photographers make exact duplicates time and time again with nary a difference. Photography today has truly reached its mechanical apex, effectively lessening any 'artistic" effort. But within this quandary of the medium, photographers are still looking for ways to find deeper expression within the pixels and ink drops.

One of my favourite examples of what being an artist, and creating art is all about, is expressed in the story of Bill Traylor. Look him up on Google. I found a book about him in the bookstore of MOMA. The story of him taking up art in his 70s, being discovered on the side of the road in Alabama, to being the toast of the New York art world, and going to his exhibition there where he himself was virtually ignored. After about two hours, he quietly left and went home to take up his paint and markers and cardboard, by the roadside, and make his art. That's all he wanted to do.

Making art for an "Art World", for some sort of elite, intelectual patronage does not have anything to do with the real, deep aspect of art. Neither is it mere decoration that hopefully matches the couch or rug. Art and artists are much more simple and pure than that. Art is an ever changing language, and artists are poets at play...
Cedric Canard(non-registered)
It is likely that this is not important in the great scheme of things and yet I am driven to respond in kind to your well articulated thoughts. Throughout the ages humanity has used many means to communicate its deepest feelings. Preceded by painting, dance, music, sculpture and the like, language is perhaps the most recent and arguably the least evolved method of communications that we have at our disposal. What's more, English is perhaps the bastard child of speech with its somewhat limited vocabulary borrowed from other languages. Sadly, these days we are witnessing the demise of language rather than its evolution. Of course, with words being the source of so much misunderstanding and hatred in the world, this may simply be a case of short-sightedness on my part. Perhaps we are heading towards a better means of communicating and I am too great a fool to see it.
Be that as it may, I feel compelled to re-state my case from a slightly different perspective and perhaps this time, project a little more light on my original intent.
Just as Art is difficult to define, so is the word artist. And yet somehow (through our hearts perhaps), we generally know art when we see it so in the end finding a definition is of no real consequence. In fact, defining art may be akin to keeping a beautiful scent trapped in a bottle. No matter how gorgeous the bottle, the perfume can only show its true value once it is released from the confines of the bottle.
For me, the artist is an essential part of society, one of the foundation stones of civilisation along with teachers, writers and healers. But putting that thought aside, the word itself is at risk of becoming meaningless and I don't mean in the sense of being undefinable (as I've already mentioned, that is of no real consequence) but rather becoming meaningless in its worth, in its value. The word is bandied around with little respect these days. People call themselves artists for having done little more than imitating the greats before them. Throughout history the artist has shown the rest of us new ways of seeing, new ways of appreciating the world. They have given us fresh perspectives and I would venture to say that they have had a great influence on the evolution of society. If for no other reason than respect, we should not sully the word artist by using it for anybody who is simply creative.
What is more, the English language, which is already poor in its diversity of words, does not need to be reduced in its ability to be expressive by using one word wrongly when other more appropriate words, beautiful in their own right, go unused. Just look at how belittled the word "awesome" has become, or "love" or "Zen".
The woman you mention Trace, with her beautifully crafted roses, you call her an artist and I understand your desire to elevate or highlight her talent but I see it as a misuse of the word "artist" and also an unjustified debasement of the word "craftsman". Her ability to reproduce her roses time after time, so perfectly and consistently is true craftsmanship, perhaps a rare thing these days. So what is wrong with saying that she is a craftsman? (And please don't get me started on any so-called political correctness with regards to the word "man" in craftsman). Is the title of artist somehow more noble than the title of craftsman or artisan? Nobility comes through one's actions and not from labels so what does a person gain by being labelled an artist? I would say the individual gains nothing but somehow the language loses integrity.
Of course, as I mentioned earlier, probably none of this matters. In the end words are labels and as such they can quickly become prisons but for now, words are what we use to express ourselves and so the correct usage of words may, at least for now, have some importance and some value; certainly no less than a finely crafted rose.
No comments posted.
Loading...
Recent Posts
How I Did It :: Used Film Post 1 How I Did It :: Used Film Post 2 How I Did It :: Used Film Post 3 How I Did It :: Used Film Part 4 How I Did It :: Used Film Part 5 How I Did It :: Used Film Part 6 How I Did It :: Used Film Part 7 How I Did It :: Used Film Part 8 How I did It :: Used Film Part 9 How I Did It :: Used Film Part 10
Keywords
Photography The Creative Life Inspiration Learning Creativity Imagination Invention Art Fine Art Software
Archive
January February March April May June July August September October November December
Subscribe
RSS
Copyright © trace photographs All rights reserved
User Agreement
Cancel
Continue