This post could be subtitled: "How's that working out for you without Photoshop?" All said, I have to say I'm only scratching the surface here with Pixelmator, but I'm incredibly impressed so far. Since declaring my self-challenge to go a year without Photoshop, I have to confess I have opened both Photoshop and Adobe Bridge, but that has been in the interest of comparing side-by-side features and workflows with Pixelmator. I have to teach this stuff, so being able to answer the inevitable questions matters. That said, as a creative photographer, and for as much as I needed Photoshop in the past, like most of us now, the lion's share of editing and creating of images has gone to other software (Aperture, Lightroom, OneOne Perfect Photosuite, Capture One, etc.)

Since Pixelmator is a Mac only application, it does leave some out in the cold. But being Mac only actually works to an advantage I think. As a program that is tightly integrated with Mac OSX, and taking advantage of many of the core image features of that OS, Pixelmator is uniquely situated as a powerful imaging and graphic app. 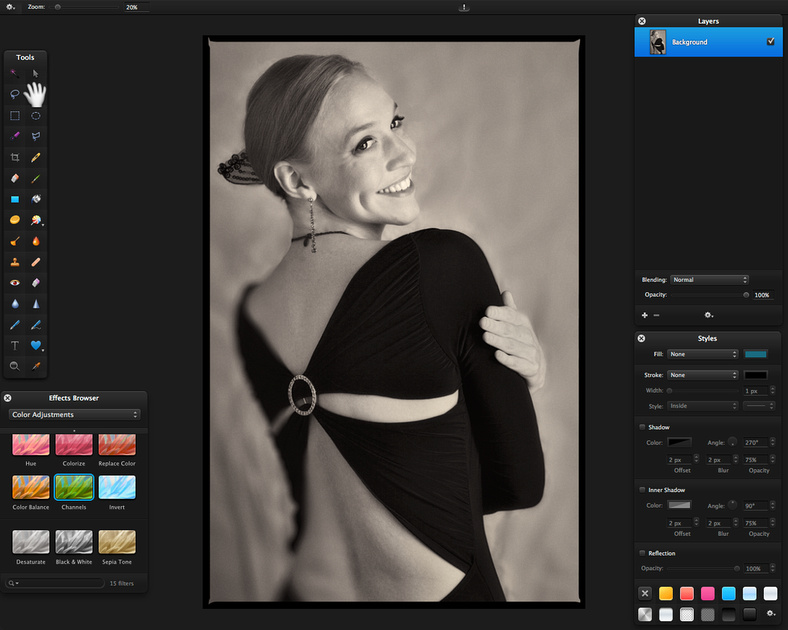 One powerful example of this integration is when you open an image and begin working on it, your changes are being "saved" in the background automatically, according to the Mac OSX system. You don't have to do anything, just keep working: 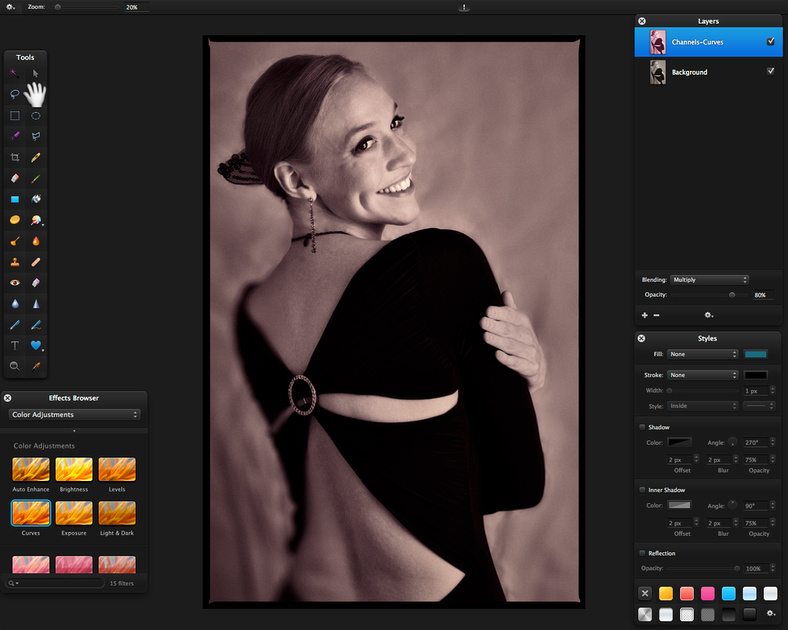 Multiple layers, layer styles, effects, any changes you care to make become non-destructive when you have previous "versions" being saved for you. If you need to go to an earlier version of the image you're working on, simply go to the File menu in Pixelmator, go to 'Revert To", and choose "Browse All Versions". 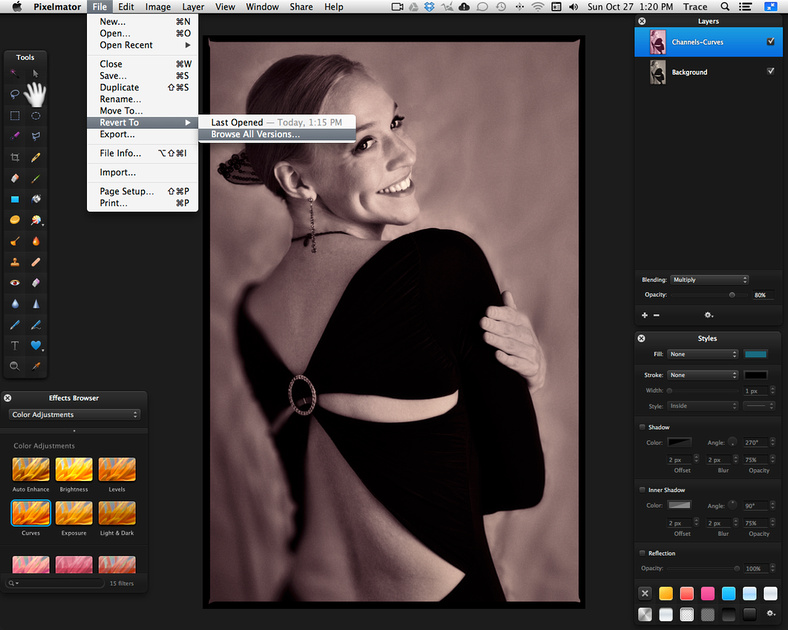 This is where it gets cool! Just like choosing this feature in any application that Apple makes itself (Keynote, Pages, etc.), you are brought into a Time Machine like interface with versions of your image on display: 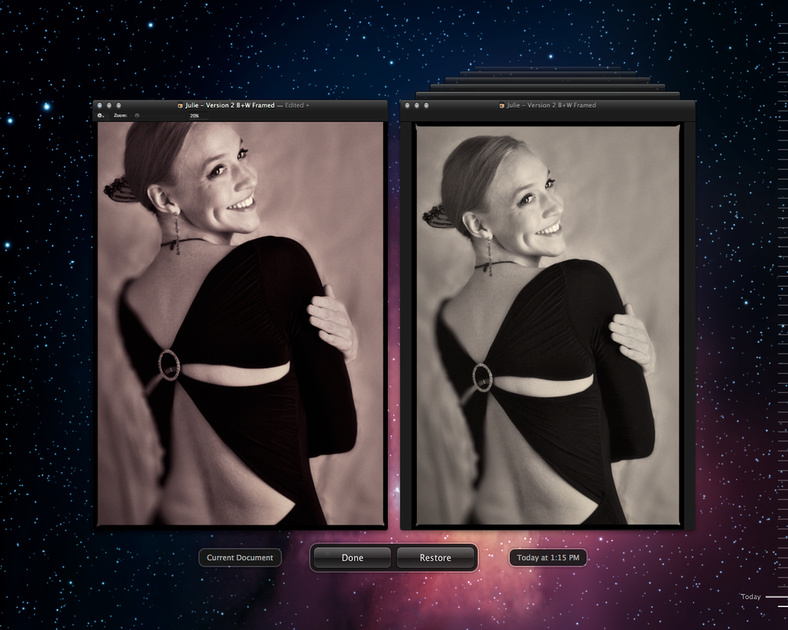 This is a great way to compare different versions, update with an earlier version and go in a different direction if you wish, or simply keep track of the evolution of an image. This is a very powerful built-in feature exclusive to Pixelmator that you can't have in Photoshop. That it doesn't require you to set it up, or even pay attention to as you go, is icing on the cake!

Now, as a long-time Photoshop user, I had some things I wanted to be sure I could use/access in Pixelmator in order to make it my go-to imaging/graphics program. Over the years I have accumulated a pretty good collection of Photoshop brushes. Some I've downloaded for free (non-commercial use), and some I've created on my own: 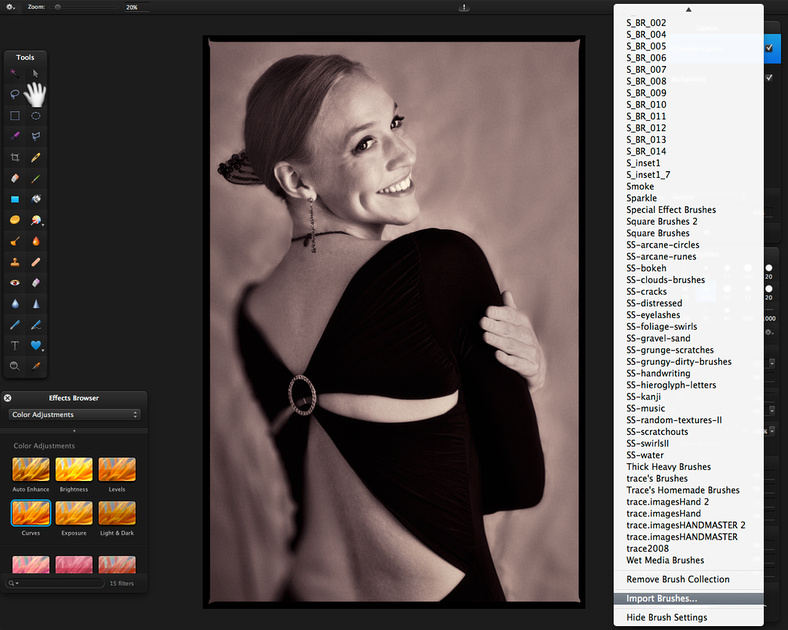 Ok, I am a brushes junkie! I went through a phase when I was playing working with brushes to add creative elements and enhancements to images. If you are not familiar with using them, they can be a powerful tool in creating compelling images. When I was first exploring Pixelmator, I wanted to know If I could use my collection of Photoshop brushes in it. Turns out the answer was "absolutely yes!" First step was finding the folder in the Photoshop subfolder maze where my brushes were stored. I then copied all the brushes into a folder on my desktop (in case this didn't work, I wanted backups). Opening Pixelmator and making sure the Brushes HUD was showing, I clicked the little gear cog which showed the list of current brushes in Pixelmator, and clicked "Import Brushes..." Then navigate to the Photoshop brushes folder and select the brushes and brushes sets to import - voila! All of my brushes are now available in Pixelmator. 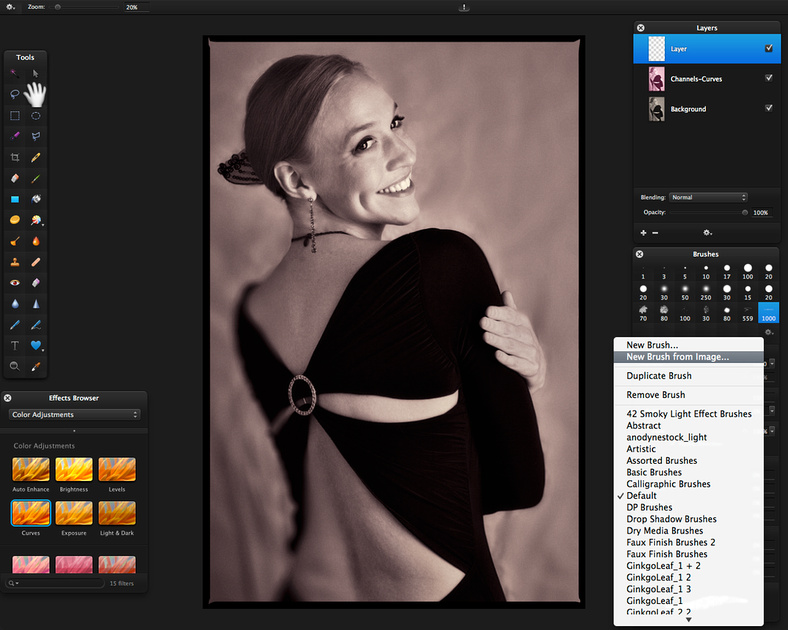 In fact, all of the things you can do with brushes in Photoshop, you can do in Pixelmator, including create a new brush from an image, and Pixelmator brushes are completely compatible with Wacom Tablets and pen-pressure features for precise brush work. This is incredibly powerful and robust for a 3.0 application!

One of the things I did recently with the brushes feature was to create a "watermark/logo" brush, and a separate copyright brush to add those quickly and easily to images, rather than using a watermark tool that is available in many imaging programs now like Aperture, Lightroom and Photoshop. I prefer the versatility that applying a brush gives me. 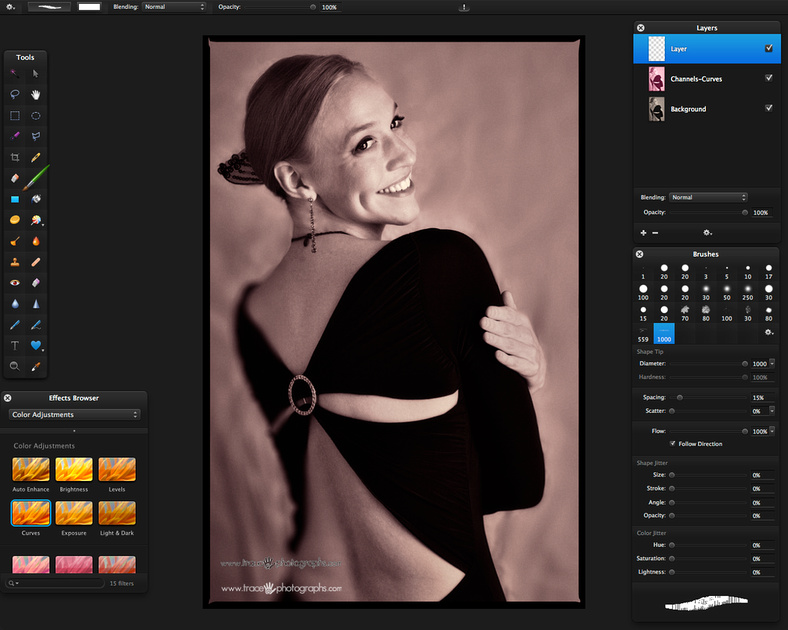 My only quibble so far about creating your own brushes, is you are limited to a brush size of 1,000 pixels. If your image is significantly larger, your brush may display quite smaller than you would like, and since it is pixel based, scaling it up beyond that can degrade the brush image. That said, what can  be done in Pixelmator, at this stage in the game, is truly astounding. It does some things differently than in Photoshop, but the learning curve is essentially non-existent.

I will continue exploring the differences and similarities between these two programs, and I'll post my honest observations, but I seriously doubt Photoshop will continue to be viable for a great many image makers. Colour me impressed with Pixelmator and the Pixelmator Team! If you have any questions you'd like answered about this incredible software, leave a comment or send an email, I'm happy to help!